I arrived at Beijing Airport about 2.5 hours before my flight and after checking in at the dedicated First Class Check-in area, I headed through security and towards the Air China First Class lounge. For how busy Beijing’s airport is, the terminal is always eerily empty.

Air China’s First Class lounge is located a level above the main concourse and there were both escalators and elevators that led directly to the lounge. 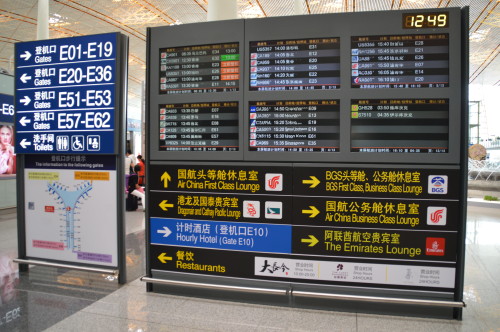 As I was checking in, I noticed that both the Business and First Class lounges were also Priority Pass lounges. To be fair, that doesn’t necessarily mean that the lounge is bad. After all, the BA Galleries Lounge in Dulles was nice enough as a Priority Pass lounge, but I proceeded with caution… At the entrance—directly opposite the check-in counter—was a wall of lockers that guests could store their suitcases in. As “locker room” as they felt, I actually appreciated it. Many US lounges have a luggage area, but they are usually completely open and as trusting as I try to be, I am always a bit nervous to leave my stuff unattended. The lounge has a semi-open design, with high ceilings and tons of windows. The main seating area was pretty empty with a variety of couches and chairs. I had just returned from a 9-hour layover, where I rode to the Great Wall and back, so I decided take a shower. The shower room was relatively tiny, but got the job done. I didn’t take a picture, but they had rubber mats (like the ones you see in commercial kitchens) which grossed me out a little.

There were different amenities provided, including a dental kit, a vanity kit, combs, etc. For reasons I couldn’t explain, there were two sets of (new, unopened) toiletries. The towels, bath mat, and slippers all came wrapped in plastic. The decor of the lounge wasn’t the most inspiring I have seen, and felt…very China, though I did like that they put a few plants here and there. I checked out the food spread which featured both hot and cold buffet options and a few made-to-order noodles dishes. Also available were dim sums, though they markings/labels didn’t match the dim sums at all, so I had to open a few to find something I liked. The beverage selection was pretty weak. They had standard soda and juices available, but the only wine I saw on offer was the Great Wall wine. There was also a pretty large dining area, but with the kind of food they were offering, I didn’t feel like a sit-down service was necessary. It seemed like other people in the lounge thought the same, since there were virtually no one sitting at any dining table.

The set up was very utilitarian—like what you would find if a YMCA was tying to be fancy with their breakfast area. …and here is proof that the tiny details matter: did no one think about removing that label from the side of the table, or am I being OCD? I did pick out a few items to nibble on. The Wi-Fi was slow and borderline unusable, but the view of the tarmac wasn’t half bad and kept me occupied for the most part. Perhaps it’s because I went in with low expectation, or perhaps it’s because I am used to domestic US lounges where I count myself lucky if they have hot soup on offer, but I really didn’t think the Air China First Class Lounge was all that bad. Well, at least for being a Priority Pass lounge, it was better than I thought it would be.

If I’m really being honest, I would rather spend time in this lounge than in, say, the United Global First lounge in Dulles, where I was mistaken as a spy. The Air China lounge had a more open setting, friendlier staff, a shower that let me freshen up, a larger variety (though perhaps lower quality) of food, and after a few bottles of the Great Wall wine, I’m sure I wouldn’t even notice how bad it tastes anymore.

Of course, that is not to say that Air China has an even remotely good International First Class lounge—if I paid full price for a First Class ticket, I would absolutely not considered the lounge an acceptable offering. This is no competition to Cathay Pacific’s awesome The Wing lounge in Hong Kong, but when I look at the big picture, the Air China lounge isn’t awful.

I like the shot of the tarmac. When we visited the lounge back in November the fog or smog was so bad you couldn’t see anything other than the tower. That gloomy look outside really made that huge and empty terminal a very depressing place.

You are being OCD, the tag on the side of the table most likely is an equipment serial number tag which is a common accounting requirement in China.
Btw the dim sum place has labels and your photo actually reflects that

Haha guilty! If memory serves me well it was one of those “Quality OK” labels—the table behind had it removed. The dim sum place did have labels, but all of the baskets were totally scrambled…I guess they had a busy morning! Fixed that in the post. Thanks 🙂