Currently Flying JFK-LAX to Connect to Emirates First A380 LAX-DXB!

As you read this I’m flying across the country from JFK-LAX on United for 12,500 miles in Economy Plus in order to connect to my first ever Emirates First Class A380-800 flight! I’ll be flying from LAX – Dubai later tonight. Why the additional flight when Emirates has two daily flights to Dubai from JFK…and there was award availability in Business? Simple, I wanted to experience Emirates First on the A380 with private suites and in-flight shower, take the 3rd longest flight in the world (no more EWR-SIN or LAX-SIN), and 12.5K miles extra to do all that seemed reasonable enough. Plus I’ll get to sample the new Economy Plus – United Completes Transcon 757 Renov – Comparing to AA & DL Upgrades. 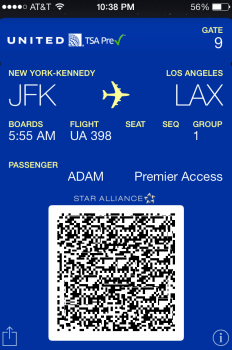 Update – We are back at JFK after turning around due to a “oven smoke event” which cut the cabin power. We ended up dumping some fuel and made a safe landing back at JFK. The fuel dump was a first for me and the crew made several announcements to explain the bumps caused by the fuel discharge and to assure everyone that we were never in any danger and that everything being done was out of an abundance of caution. There’s another plane that just arrived for an anticipated 235pm arrival. Luckily, I had United check the bags all the way to Male…though I’m still a bit nervousness whether the baggage transfer will go smoothly with the reduced time.  Side note – Mom did not appreciate  the “call united for flight information” message she received when checking our flight status earlier.

Now, a few questions I know will come up.
1) How did you get Premier Access and Economy Plus seats after recently writing about United downgrading your status? That’s thanks to my friend Michael. He has Premier status and booked the JFK-LAX flight for me…thanks Mike!
2) Why didn’t you combine your Emirates flights with Alaska operated flights to save points and get yourself to LAX? Well, there’s only one flight per day and we would have had to fly EWR-SEA-LAX with a layover in Seattle on Sunday night.
3) What are you going to do with the long layover in LAX, arriving at 10am and departing at 4pm? Well, since there is no Emirates Lounge (they make use of the SkyTeam Lounge at LAX) we are sort of open to suggestions and most likely will leave the airport. What say you readers? We have complimentary Emirates Chauffeur service back to the airport later in the afternoon should we choose to leave.  PS – Open to suggestions for our Dubai layover as well (see below)…though of course we will be spending some time exploring the Emirates First Lounge. We will again have complimentary Emirates Chauffeur service.

Talk about waiting until the last minute…but I always say you find the best seats when you are extremely flexible and can hold out as long as possible. I have reservations at the Conrad Hilton in the Maldives starting next week that were booked just prior to the HHonors devaluation at the amazing rate of 37.5K per night instead of the new rate of 95K per night. However, until today I still did not have any flights booked. I was hoping for Emirates First Class to open up from New York, but as of this evening only business class was available for two seats on the JFK-DXB leg. However, the LAX-DXB flight had First open up last night and so I went ahead and pulled the trigger today, booking with my Alaska Airlines miles (180,000 and $30 total). Unfortunately, there were no available domestic connections from NYC – LAX on Alaskan metal using miles at the standard award rate, so I’ll have to book the connections separately. I am pretty psyched for my first Emirates First experience though, especially since it will be on the A380 with the in-flight shower spa! Until now, I’ve only flown them in business – Emirates A380 Business – JFK-Dubai Trip Report. There were easier connections available via Houston, Dallas, Toronto, Boston and Washington, but none of those locations would have given us the Emirates First A380 experience. Check out the full Emirates A380 First experience here.

Pretty cool, one day prior to our flight we received an email with a link to our flight including all amenities, full movie listing, food, etc. Airbus Posts Handy Map with All A380 Routes – Subway Style

The UNITED premium coach product is called Economy Plus or E+, you are using Delta terminology. Enjoy the EK F experience!

While you are in LA go to In n Out.

Regarding this “He has Premier status and booked the JFK-LAX flight for me…thanks Mike!”
As far as I know, United reservation, this is not doable, unless Mike listed in the same itinerary. I am missing something here.

@RedHat – If booked from Mike’s account the status transfers over… worked fine and printed on both our boarding passes.