Low-cost carriers Icelandair and WOW air are mainly driving this impressive growth, although American and United both added service to KEF in 2018, in addition to Delta’s service from two U.S. gateways.

In 2012 – the year WOW air launched service – Icelandair’s share was 80.4% of all seats to and from Iceland, according to a report from CAPA. Icelandair’s market share has since fallen to 47.1%, the first time ever the ‘original hometown’ airline has fallen below 50%.

Annual traffic continues to soar, according to data compiled by Keflavik Airport: Delta became the first US carrier to serve Iceland in 2011 with seasonal service (now year-round) to its New York JFK hub. The carrier has since expanded its Icelandic presence with summer-seasonal service to KEF from Minneapolis/St. Paul (MSP).

In Summer 2018, American and United joined Delta and the ‘Icelandic Duo’ in bolstering summer-seasonal service to KEF. American serves KEF from its Dallas/Fort Worth hub and United from Newark (EWR) – both using a similarly configured Boeing 757-200.

Geography, mostly – both in terms of stunning natural beauty and proximity to North America and Europe. We tend to think of transatlantic flights as ‘across’ the pond, but KEF’s northern position is equidistant from Florida and Alaska.

Most of North America (and all of Europe) is within the range of narrowbody aircraft like the Boeing 757-200 and Airbus A321neo, allowing Icelandair and WOW air to serve secondary markets like Cleveland (CLE), Pittsburgh (PIT), and St. Louis (STL).

Both Carriers Turn to Next-Gen Narrowbodies

For years, Icelandair’s primary strategy was to fly older, fully-owned (and paid-off) Boeing 757 aircraft with lower utilization rates. In any cities – Denver, for example – Icelandair’s 757 sits on the group for 22+ hours. That strategy is changing, however, as Icelandair recently started operating Boeing 737 MAX aircraft. 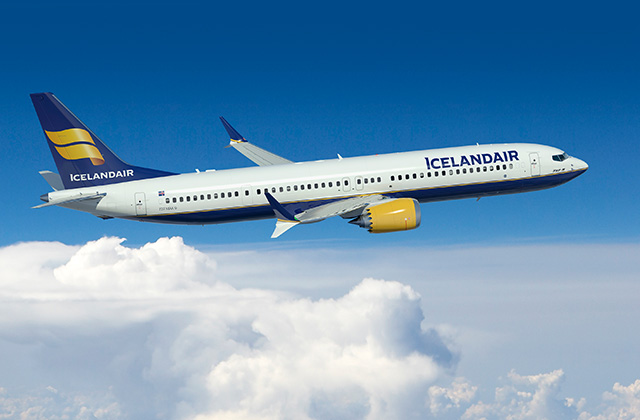 While Icelandair operates one of the oldest fleets, WOW air’s average aircraft age is just 2.9 years old. You can read more about WOW’s fleet here, including cute aircraft names like TF-CAT and TF-DOG.

The Next WOW Wonder: Asia

With its impressive growth, WOW air has already demonstrated it can both stimulate demand and keep up with impressive 30% growth figures. WOW Air Founder and CEO Skúli Mogensen believes transatlantic low-cost carriers can take on the ‘legacy cartel’ and control up to a quarter of North America to Europe market:

Historically, 99 percent of the transatlantic market has been controlled by what I call the legacy cartel. I am confident the low-cost carrier model can capture up to 25 percent.

The carrier doesn’t plan to stop at North America, however. In May 2018, WOW air announced plans to launch Delhi in December 2018, targeting US connecting passengers. Rather than connecting in New York, for example, a passenger could fly Dallas (DFW) – Reykjavik (KEF) – Delhi (DEL).

WOW air CEO Skúli Mogensen has ambitious plans to turn KEF into the “Dubai in the north” – connecting up to as many as 15 destinations in Asia! Again, KEF has a tremendous geographic advantage. The following destinations are easily within range of WOW’s soon-to-be-delivered A330-900neo aircraft:

Routes Within Range of an A330-900neo From KEF | Image: Great Circle Mapper

One thing is certain: WOW is just getting started.