On road trips, sometimes the highway seems endless. Ever wonder where you can get a quick coffee? Fuel up? Or, perhaps most important, find a clean rest stop? Enter iExit, the best tool for finding interstate exit options. As we take to the road again, it’s best to be prepared!

Friends of mine told me about this app. What convinced me to use it was their stories about all the great meals and quirky stores they found when using this app to decide which pitstops to make.

iExit is the free mobile app for iPhones, iPads and Android devices that tells drivers how close they are to the nearest gas station, coffee, restaurants, lodging, or even a hospital off any interstate exit.

Drivers can search for specific business like Dairy Queen, Chipotle, or a KOA Campground, or for more generic necessities like WiFi, truck parking, or a playground for kids or a dog park for your best friend. 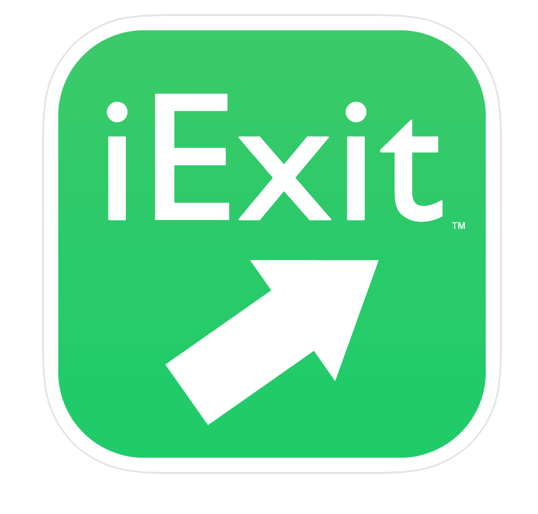 Evan Metrock, owner of Metrocket LLC, created the app in 2010 to help drivers find their best exit options to meet their needs. iExit works by using the driver’s device location to determine highway location and then displays upcoming exits in real time.

Metrock got the idea for the app from his experience on long road trips. As he passed billboard after billboard he was vaguely aware they publicized ‘some business at some exit.’ Like any good app developer, he realized other road travelers must have the same frustrations he did. After envisioning a better way to package and communicate the information, he developed iExit.

His next step was to learn what interstate exit information was already on the internet. He found a website, allstays.com, which compiled interstate exit data and points of interest throughout the country. Using the site’s information, he created a prototype of iExit, and contacted allstays.com. The website owner enthusiastically encouraged Metrock to develop the app.  The two companies joined forces until Metrock took full ownership in 2011.

Consumer Reports stated that iExit information was complete and current, with simple, easy to use menus. Engadget also gave iExit the thumbs up. Engadget cited its thorough search field. The search field includes a list of destinations, a one-touch call button, web links, and Google Street View image. It also has a feature that lets the user choose Apple or Google Maps.

Metrock remains a small company that packs a big punch. Users have downloaded the app more than 100,000 times since its 2010 launching. The company has received national media praise from The New York Times, USA Today, and CBS Moneywatch, to name a few.

Do you use iExit? What’s your favorite feature?

What is an Amazon Watch Party? New Prime Member Benefit

Freedom in America and Travel – Coronavirus This Independence Day

Six Things To Do Before Traveling Internationally

Post-COVID Travel Will Be A Bit Of An...

OWG, A Leisure Carrier Based in Quebec, Launches...