If you’re planning to travel in the Polaris Business Class cabin on United Airline’s Boeing 787 Dreamliner, your experience may vary considerably depending on where you sit.

United presently operates two variants of the Dreamliner, the 787-8 and 787-9. The airline will also begin service in the next year on the 787-10, though preliminary reports indicate the 787-10 will be equipped with a variant of the new Polaris seating product currently used on the 777-300er. The 787-8 and 787-9 are both equipped with the B/E Diamond offset lie-flat seats first introduced by Continental Airlines in the mid 2000s, in a 2-2-2 configuration. Other than the new Polaris seats, these are (still) the best business class seats in United’s fleet.

Their design presents some unique quirks that diminishes legroom in some of the seats. You’ll want to consider your exact seat location carefully if you’re trying to maximize leg and sleeping space on the Dreamliner.

I had the chance to get intimate with a Dreamliner at United’s annual Family Day picnic in San Francisco last weekend. Here is my (somewhat subjective) analysis of the best and worst business class seats on the aircraft.

Update: This analysis applies to ex-Continental Airlines ordered Boeing 787-8 and 787-9 Dreamliners (the seating installed is a version of Continental’s BusinessFirst seat design). United’s new 787-10 Dreamliners feature the United Polaris seating product, which is different than the seating discussed in this article. United has plans to slowly retrofit all of its Dreamliners with Polaris seating beginning in late 2019.

On some of United’s aircraft — specifically the Boeing 747-400 and 767/777 variants that feature three cabins — the bulkhead row seats are no different from every other row. Not so on the Dreamliner. 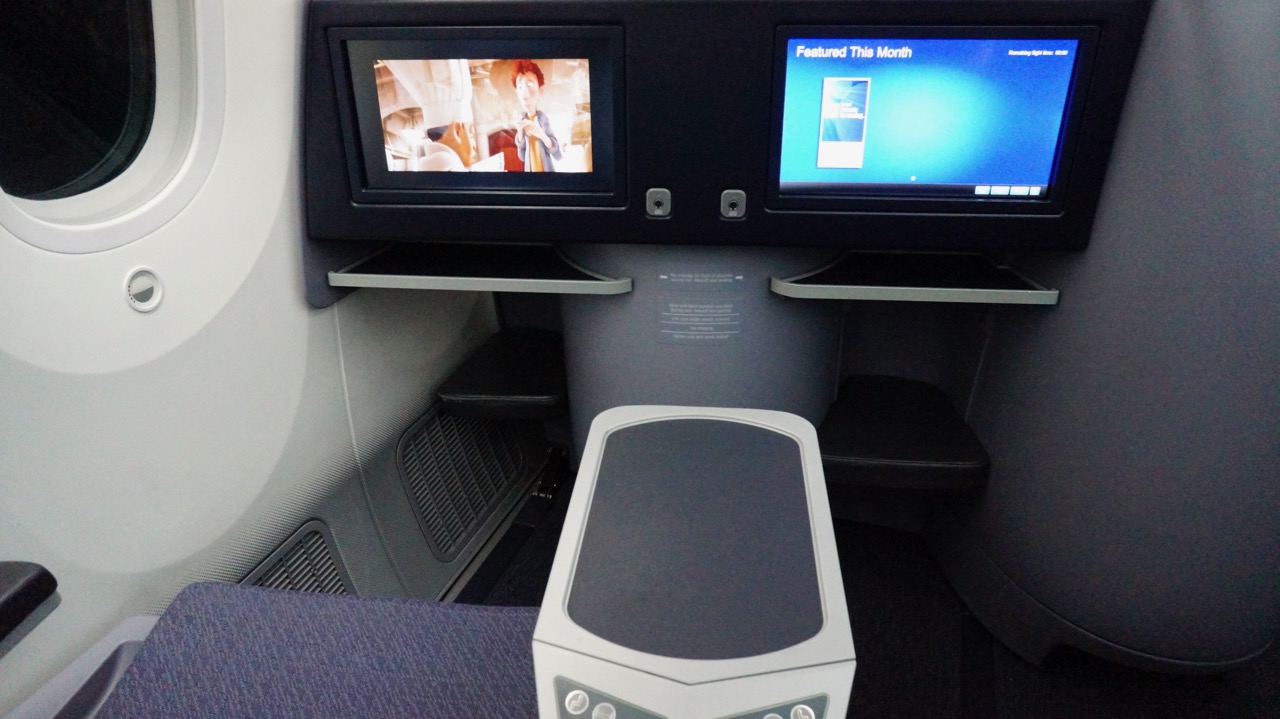 Most business class seats on the United 787 Dreamliner have footwells that look like this. 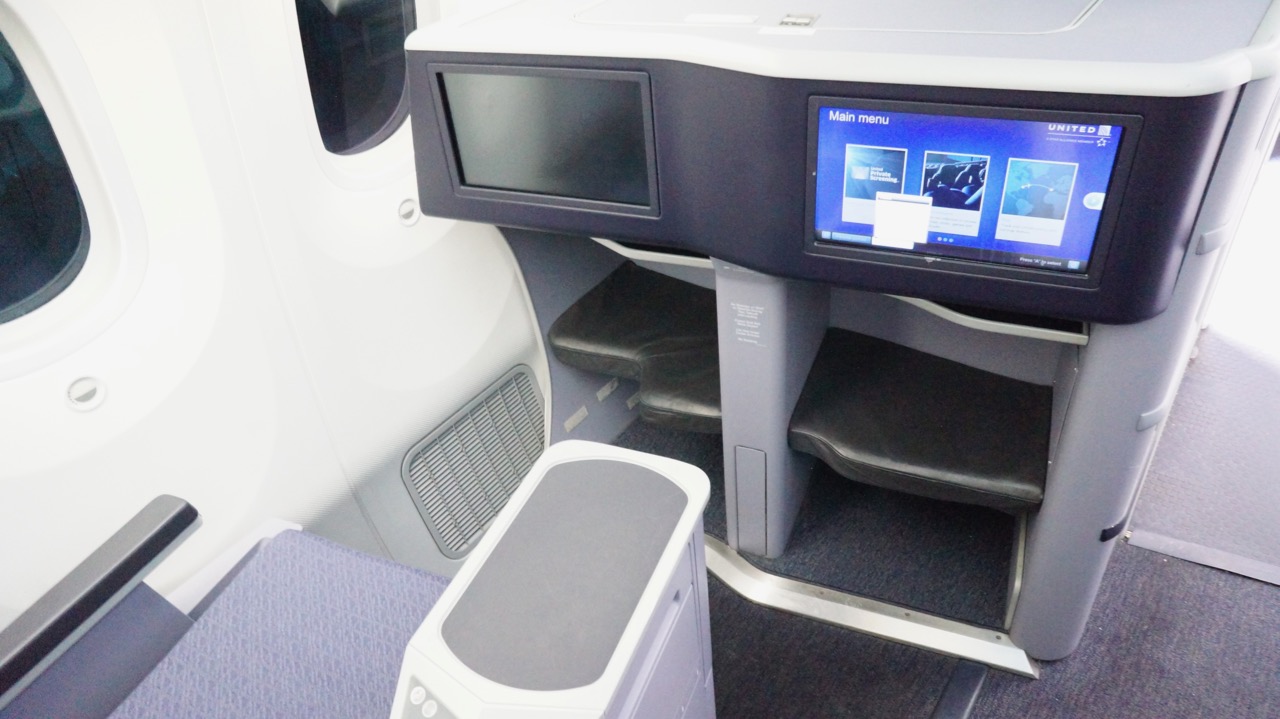 The bulkhead row business class seats on United's 787 Dreamliner have footwells that look like this.

For a different illustration of the difference in the size of footwells in the bulkheads compared to those in every other row, here’s a pair of photographs featuring my size 13 shoes. I could easily turn on my side or have my feet rest at an angle in the bulkhead row. In the normal seat, forget about any wiggle room. 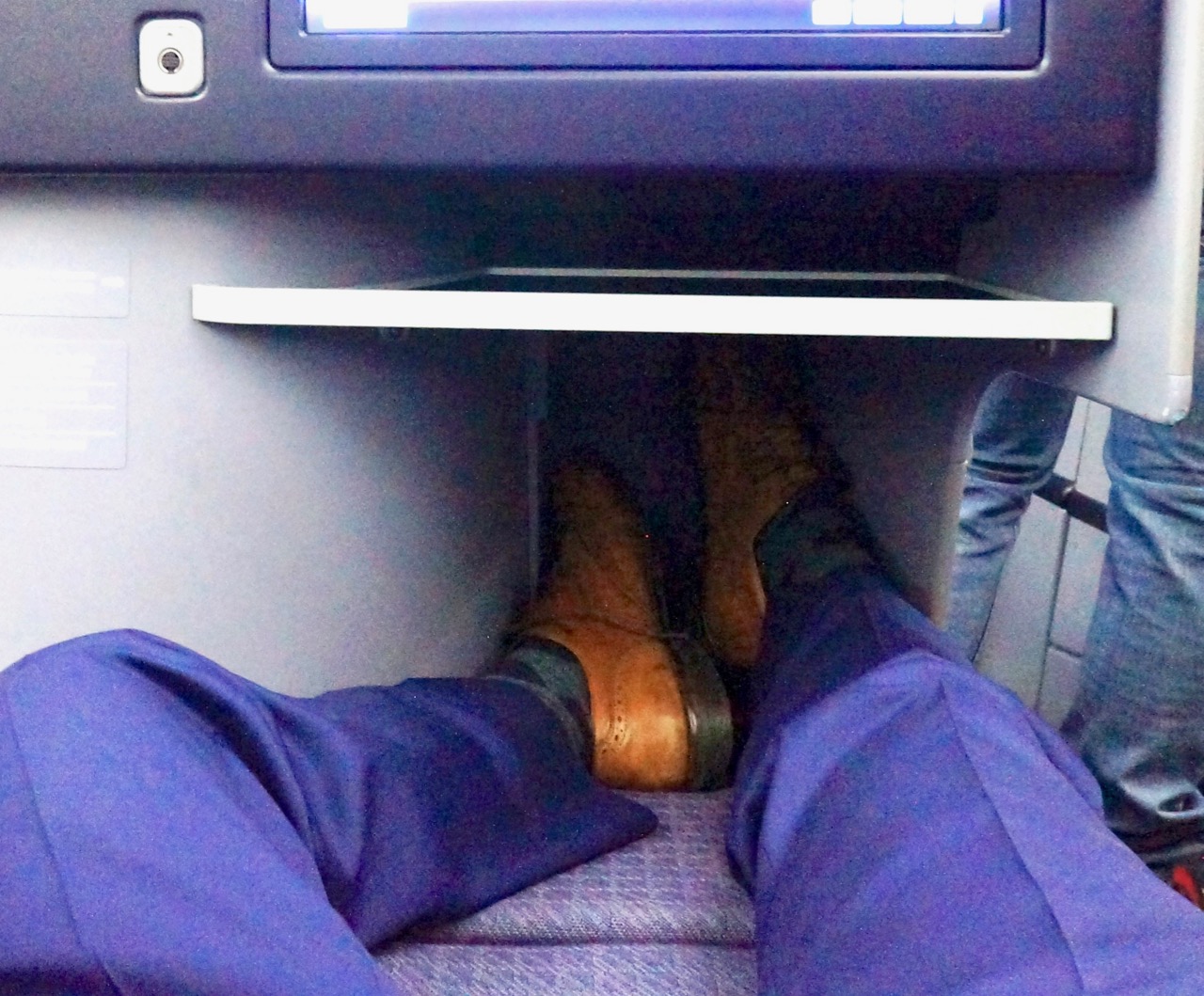 Choose Seats On The Outside Of The Slant

The B/E Diamond seats are installed at an angle, with rows near the window facing the window and the pair of seats in the center facing toward the right side of the aircraft.

Not only is the forward-most footwell not constrained between two seats, but the angle of the seat creates a deeper space for your feet to rest. The forward footwell ends up slightly larger than the rear footwell, enough to make a difference if you’re tall or big footed (or both). The effect is the same for seats near the window. The window seats have slightly larger footwells than the aisle seats, which are sandwiched between the two seats in front. 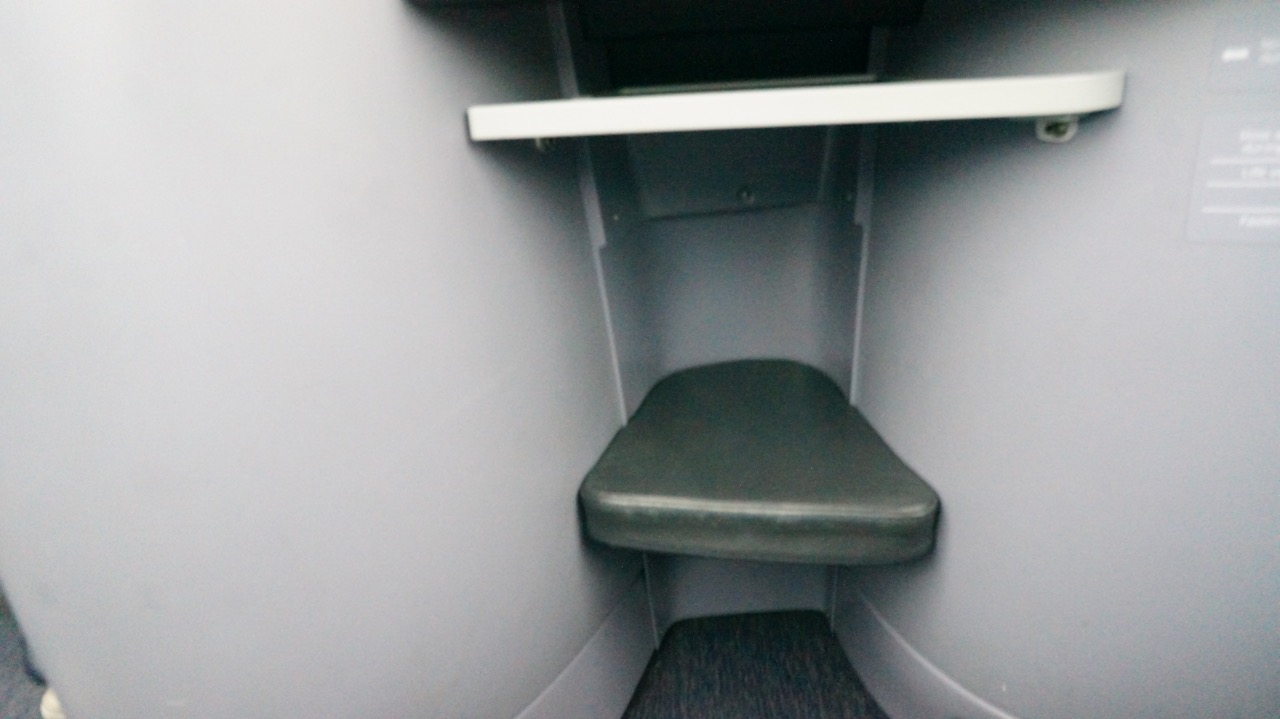 The rearward seats have footwells that are constrained by the seats in front. The forward seats have footwells near either the aisle or cabin wall, providing more space in the rear of the footwell and in the corner.

Chase’s Ultimate Rewards program allows Sapphire Preferred and Reserve cardholders to transfer points directly to United. It also offers great versatility, as the points can be transferred to over 10 different airlines.

Like the United cards, both Sapphire cards often come with new cardholder bonuses that can secure a business class seat.

Any business class seat is an improvement over an economy class seat, and for shorter and smaller passengers the difference in footwell size might not be noticeable. However, if space is important remember to look for bulkhead seats and seats with a footwell not constrained by the center console. What’s youre favorite place to sit on the Dreamliner? Share in the comments below.

Everything You Need To Know About The Coronavirus...

Grand Hyatt Taipei Review: Does It Live Up...

I guess there are times when it must be great to be small. As a six-foot-plus traveler with size 13 feet I appreciate this information. I have flown on a United 787-9 LAX-MEL-LAX in seat 2E and found the footspace completely too small and uncomfortable.

What is the difference in size of footwell in row one business 787-9 between the two center seats and the aisle seats.

The bulkhead footwells are all exceptionally large. If there is a small difference between them, it wasn’t enough for me to notice 🙂 Enjoy your Dreamliner flight!

Bulkhead row is noisy being close to galley or toilets. 787-9 seat 3A no problem with size 9 feet. At 6’ tall the seat length is more of an issue when in lie flat

more a question than a comment. does the little divider window come out? or maybe collapse in?
my husband and i are in6A+B and like to feel close to each other, hold hands and talk.
can’t seem to get an answer anywhere!!!

Hi There,
There will be no hand holding in these seats. They are physically separated by probably 4 feet when you count the circumfrence of the divider. They are designed to feel like entirely separate pods and create a semblance of direct aisle access.

thank you. i appreciate it. it’s too bad for couples in the front of the plane.
a real quality problem, obviously. but my husband and i really like each other.
we like to sort of drink and eat and hang. can’t find any seats conducive for that!
still excited about united polaris!!!

If you’re flying on the 787-10, you will enjoy the new Polaris seats. The center seats are so-called “honeymoon” suites, which are side-by-side. United plans to start retrofitting its other 787 types later this year.

About to fly SFO-SIN in a couple of weeks … and see that, by chance, have picked a good seat in 1K.
After reading your review, am tempted to look for one of the middle set of seats in either 1 or 6. Only thing that concerns me is that I’ve heard that the little shelf there becomes a snack bar for during the flight – which implies some traffic. Is that the case??

I flew SFO – AKL on a 777-300 in seat 9G and SYD – LAX on a 787-9 in seat 6E. Both are the bulkhead seats in the second Polaris cabin. The snack bar is not put on the shelf in the front of the seats. It is put on the other side of the bulkhead wall in the galley. I highly recommend these seats. The foot space is huge. I was not bothered by other passengers at all.

Thanks Billy – changed myself to 6D (since article says that outside of the angle is even roomier still!) 🙂

Maybe it varies by flight. Flew TLV-SFO recently on a 787-9 and the crew *did* put snacks on the shelf in front of 1D/1E on my particular flight.

I’ll be flying SFO-SYD on the 789 with wife in a few months, currently in 6DE, looking forward to a decent night’s sleep. Slightly concerned about what appears to be a coat closet in the bulkhead directly ahead of those seats, and the location of bassinets.

Will be using ear plugs so noise probably not an issue even if someone in AB or KL has a baby, but looking for any personal experience with getting moved from a bassinet row to accommodate parents who need a bassinet. Does United do that for folks who book late? Would be seriously peeved to have selected these seats in Jan for an Aug flight specifically for the foot room, and get bumped into a different row.

Lest anyone think I’m a kid hater, nope, I have 2 kids and they’ve been flying since they were babies, I just don’t want to lose the foot room and looking to mitigate the odds of that.

Hi, John. The dilemma is that the BH seats have much roomier footwells, and I need those to sleep comfortably; being moved to a different row would greatly impact my ability to sleep well. Yes, definite first world problem :> but since this is an anniversary trip for us I want it to be as great as possible.

As an aside, I wish I’d had the time to research United’s planes, I’d have selected the 773 for the TP flight for true Polaris hard product, but since I got in on that $1500 RT ORD-SYD fare that NZ posted in January, I’m REALLY not complaining. Much…

That said, I did some digging after posting my initial comment and learned from United’s website that the bassinets are over the AB and KL seats only, the DE seats don’t have a bassinet, so no problem for me.

Hi Pam,
You’re on a Polaris-equipped airplane, and those seats are, in general, quite spacious and better on the foot-space than these older seats described above.
Enjoy your flight!
John

Hi and thank you!

Is row four noisy bc of the galley?

I presume you mean on the -8, since row 4 is in the middle of the large biz cabin on the -9. I flew row 6 on the -9 last week, which looks like the same basic set up as row 4 on the -8, based on that experience I would say you won’t be disturbed. But I will caveat that by saying that I wear earplugs while trying to sleep, so YMMV.

I am on the 787-8 with six rows of business. This says row 4 is best. However it seems close to galley. Any issues with noise/lights?

Hi John, thanks for this article. I may number among the more petite readers (5’2″) . Still found this article helpful as I prepare for my first business class flight from SFO-DEL on a 787-9. Will be in Seat 1K. Thanks and happy new year!

Review is helpful, flying to SFO-DEL and back – both chose 6A. Will post my experience upon return Feb 18.