Qantas only operates a First Class cabin on their A380, featuring full flat beds in a 1-1-1 configuration. It’s one of the “aspirational products” that many love to redeem points on, in part because they represent one of the most comfortable ways to get from the US to Australia non-stop, and can be very difficult to book. I flew them just a few months ago, and was a fan of their onboard products. The current pajamas were thin and light, with a Qantas logo (they shrunk like crazy though). The amenity kit featured SK-II products, which is a highly regarded Japanese beauty brand. Both are made by Buzz Products, which partners with a variety of airlines for in-flight offerings. 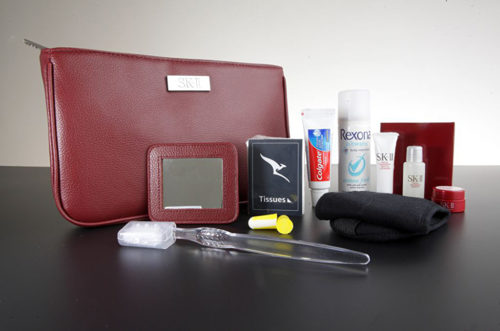 It looks like Qantas is changing it up. They posted pictures of new pajamas and amenity kits on their website yesterday. Both the pajamas and amenity kits will be by Martin Grant, an Australian designer who also designed Qantas uniforms. The new amenity kits will feature ASPAR by Aurora Spa products, which Qantas uses in its lounges and in its current Business Class amenity kit. They have also removed the shaving kit from the men’s kit, and the mirror and tissues from the women’s kit. So in a way, many might consider this a “downgrade” from the previous kits.

Like it’s current rendition, the new amenity kit will come in male and female versions. The pajamas and slippers will continue to be unisex, but eye masks will be…gender-specific. (because it comes from the amenity kit, not the “pajamas kit”) The pajamas will also now come in a reusable drawstring bag. I actually liked the old way they presented the pajamas, with a bow that adds elegant, but the bag is definitely more practical. No official word from Qantas about when these will be rolling out, yet. But consider they are making the photos public, I would imagine you could expect these in no more than a few months. […] carrier Qantas will soon introduce new amenity kits and pajamas to its first class passengers. The airline only offers a first class cabin on its fleet of A380s, […]