Last week, the US Department of Transportation granted American Airlines six additional months to begin their LAX – Beijing (PEK) flight. That’s shorter than the one year American was asking for in their request which said that the Chinese government and Beijing refuse to grant them commercially viable slots. Meanwhile, Delta had placed another bid for the route after American said they would not be able to commence the route prior to the March 16th deadline. That bid was rejected by the DOT.

“When we selected American’s Los Angeles-Beijing proposal, we did so because we concluded that American’s proposal would provide greater enhancements to competition and service than selection of Delta and would thereby maximize public benefits. The Department recognizes that, in granting an extension of the start-up deadline, the benefits of American’s service might be somewhat delayed. On balance, however, we have determined that such a delay, resulting from American’s inability to obtain commercially viable slots from the Chinese authorities, does not warrant the carrier’s loss of authority and the resultant loss of those public benefits that formed the basis of our selection decision.”

Back in November, the US DOT selected American over Delta and awarded the airline the right to operate a daily flight from LAX to Beijing (PEK). However, American says it’s been unable to actually obtain takeoff and landing slots from the Chinese government…even ones at midnight and in the wee hours of the morning.

.@AmericanAir says China has refused to grant it PEK slots to operate the LAX service it has @USDOT approval for

In retaliation, American filed an objection with the US DOT, asking them to block the renewal of Air China’s authorization on Beijing (PEK) – Houston (IAH). The objection lists “the failure of the Civil Aviation Administration of China to make commercially viable slots at Chinese airports available to American and other U.S. carriers on a reciprocal basis.”

“Even though American was recently awarded the U.S.-China frequencies and necessary exemption authority from the (DOT) to inaugurate Los Angeles-Beijing service, American cannot serve this route without slots in Beijing,” American wrote. “To date, the (Civil Aviation Administration of China) has refused to provide any slots to allow American to exercise its bilaterally conferred rights.”

American alleges that the Chinese government is helping Air China maintain a monopoly on nonstop service between LAX and PEK.

According to Dallas News, United is experiencing similar difficulties at Shanghai (PVG). 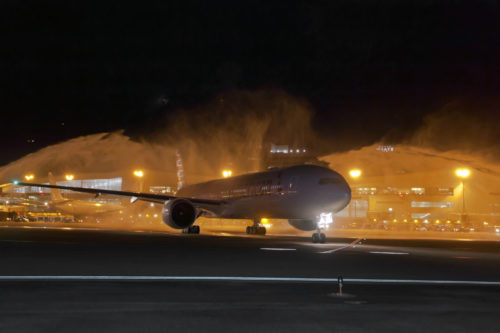 According to Dallas News, United is experiencing similar difficulties at Shanghai (PVG).
=============
United has had issues with its last two expansions into PVG. It required two six month extensions before it was able to get slots to operate the second daily SFO-PVG service (it finally got a just after midnight departure from PVG). Right now it’s having difficulty getting one slot per week to expand its Guam-PVG service from 2x to 3x weekly and has been granted a three month extension.

And note that when United had its issues starting the second daily SFO-PVG, American wrote to the DOT supporting UA’s application for the second extension. I wonder if UA returned the favor.

Delta’s application to get American stripped of the LAX-PEK authority is a right cheek. It’ll be able to secure slots at PEK because China Eastern will give up one of its slots for them (in return for favors later on). American doesn’t have a Chinese partner carrier that can do that. And Delta demands that while it continues to fly NRT-PVG, a route that it can transfer to the US mainland (and to another Chinese city) at any time it chooses.