Ringing in the new year in big cities can be really exciting, but what if you can do that twice in one “day”? Because of time zone changes, it’s technically possible, and PrivateFly is a company that is offering an option to do exactly that.

The charter flight will be operated by a Gulfstream G650ER, which is one of the fastest business jets out there, and has a range of over 8,000 miles. The journey starts in Sydney, which is one of the first major cities to ring in 2017. (I believe Auckland is 2 hours ahead of Sydney, and Tonga will technically start 2017 before anyone else).

After a night of partying and counting down to 2017, you will be whisked away to Sydney airport (SYD) to board the charter. Up to 18 passengers can continue the celebration onboard the 12-hour flight, which will depart at 2 am on January 1, 2017, Sydney time.

The plane will land in Los Angeles’ Van Nuys airport (VNY) at around 7 pm on December 31, 2016. Because Los Angeles is 19 hours behind Sydney, you will have plenty of time to get to your party or venue for celebration, in time to ring in 2017 a second time.

For those looking for more economical option, sadly there isn’t a flight that departs Australia or New Zealand after midnight, and lands in the US in time for a second countdown. The closest thing might be Air New Zealand flight number 2, which is scheduled to depart Auckland at 11:10 pm, and land in Los Angeles at 2:10 pm the same day. So…you’d be only a 50-minute delay away from being to ring in the New Year twice on the ground.

I took a New Year’s Eve flight in 2014, when I took off from Hong Kong at 7:45 pm local time, and landed in New York an hour or so before midnight. I thoroughly enjoyed my experience in Cathay Pacific First Class, and the flight attendants had a small champagne toast in-flight. 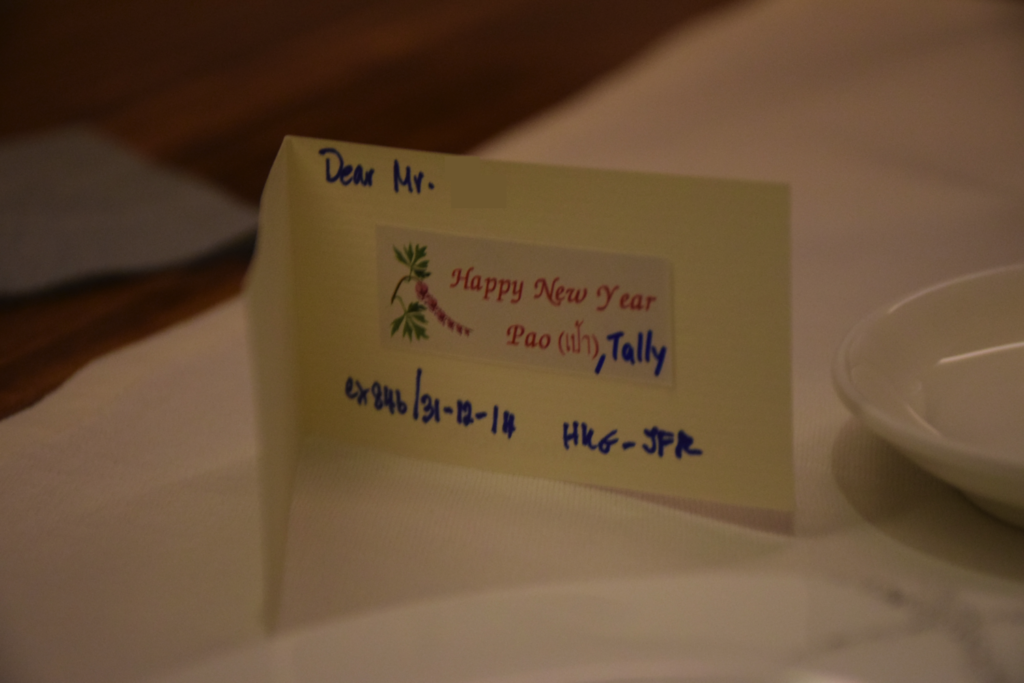 The “Bon Appetit” note from flight attendants for my New Year’s Eve flight.

But it was much less glamorous after landing, since I dashed to Penn Station to get on the 11 pm Amtrak train. I needed to head back to Philadelphia right away in order to avoid the craziness that was sure to come after the countdown in New  York. And thankfully, I succeeded, which of course ended up with me ringing in 2015 in an empty Amtrak train cabin. Glamorous, I know.

Have you had any fun New Year’s Eve experiences?

Earn 250 Aeroplan Miles and Keep Your Miles from Expiring