A Guide to Porto, Portugal and Douro Valley: The Port Wine Region

Porto is Portugal’s second city, located in the northern half of the country. Home to the port industry that that put Portugal on the map, Porto is a thriving city set on the steeply terraced banks of the Douro River.

The old city is home to the Romanesque Porto Cathedral, one of the city’s oldest monuments, Torre de Clerigos, and the Porto Stock Exchange. All are worth seeing on a walking tour of the city, as they’re important to the history and growth of Porto How To Get To Porto

Porto’s Francisco Sá Carneiro Airport (OPO) is located about 11 kilometers (6.8 miles) from the city center. To get into Porto proper, simply jump on the metro. Line E links the airport with various stations in Porto and Vila Nova de Gaia. There are also taxis and buses, or you can hire a private driver to meet you.

Once in Porto, you can use the metro to get around, although the city is compact enough that walking will suffice.To get out to the Douro Valley or northern Portugal, I suggest hiring a car.

(If it wasn’t clear from my New Zealand transportation post, I much prefer driving for the freedom it allows!) However, that being said, if you’re staying in Porto and simply want to explore the Douro for a day, there are a variety of day tours operated by wineries and tour operators.

Porto, Portugal And The Douro Valley Porto lies on the steep hills above the Douro River. Base here to explore the wine regions or stay a few days and then head east.

Porto lies on the steep, steep hills above the Douro River. Vila Nova de Gaia, the new town, is on the opposite bank. The Atlantic coast is a few miles away, and within minutes from the city there are sleep fishing villages with fantastic restaurants, a new cruise terminal, and top notch surfing.

In town, attractions include the aforementioned cathedral, Torre de Clerigos, Livraria Lello (a famous bookstore), the stock exchange building, and Sao Bento railway station. Excellent food and wine abounds in Porto (and not just port). Head for the Ribeira do Porto – the medieval riverside quay – to taste your way through Portugal’s best food. Porto’s barcas rabelos once carried port down the Douro River; some are still in operation, but mainly as a tourism vessel.

Porto is also home to a rich artistic tradition. A local guide is the best way to meet these artisans, who painstakingly handcraft everything from tiles (both modern and traditional) to brushes and boots. The shopping is, as expected, wonderful!

Of course, port wine is central to the namesake city. The ancient flat-bottomed boats, called barcas rabelos can still be seen along the river today, transporting wine from the valley. The majority of the port wine cellars are located in Vila Nova de Gaia. Douro Valley grapes come to be processed and bottled in these cellars before export. The Douro Valley is the world’s oldest demarcated wine region. The appellation was designated in the 18th century, but there is extensive evidence of wine production in the Douro from the 3rd century.

There is also evidence of grapes at even earlier archaeological sites, but no hard evidence of wine production. Five grape varietals are used to make port; these can also be used to produce red or white wine. (And yes, there is white port.) While a river cruise is an ideal way to see the many wineries and terraced vineyards, it’s also easy to take a day trip by car or bus into the Douro Valley. A selection of port wines, white, ruby, tawny and vintage.

The Douro Valley actually extends into Spain and wine grows through the entire region. While port is the main export, Douro wines range from light Bordeaux styles to deep, rich Burgundies. 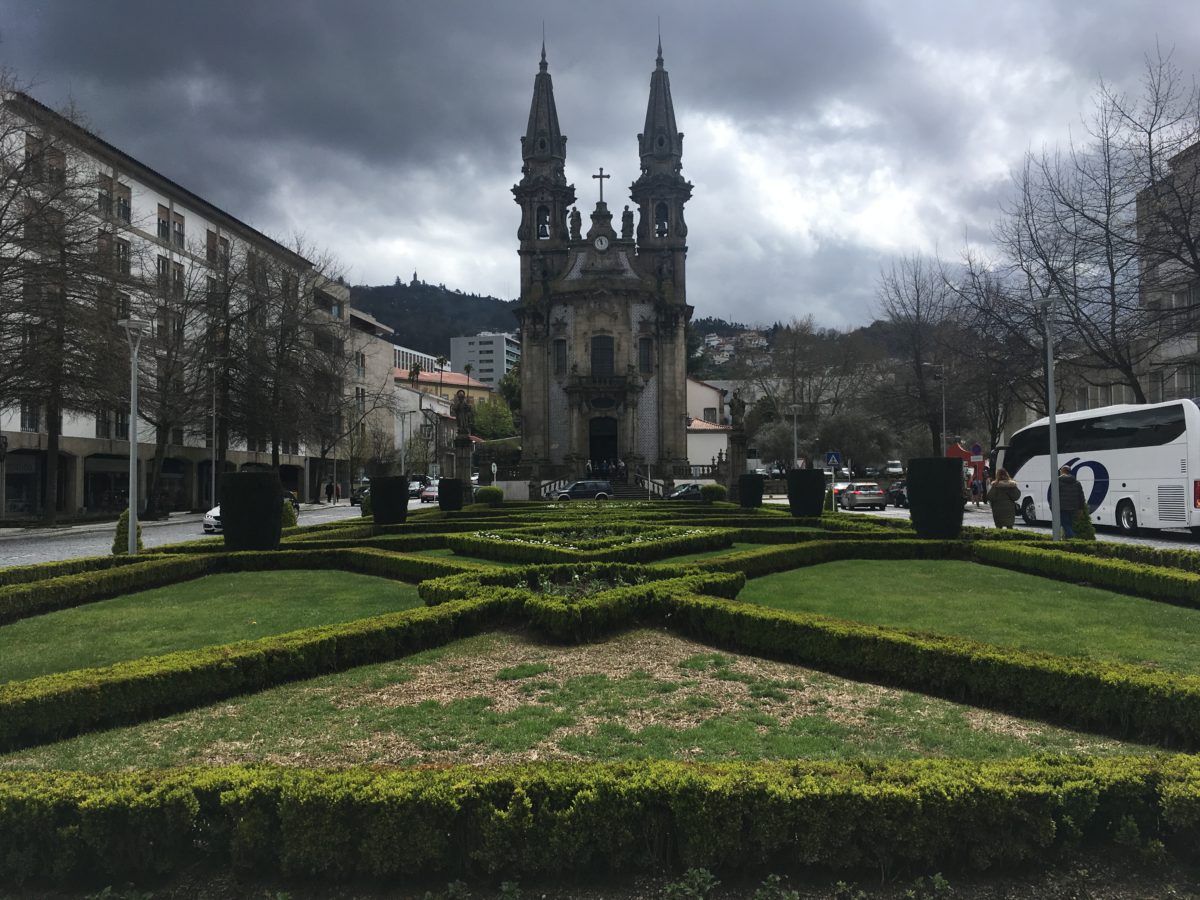 Guimaraes, northwest of Porto, was Portugal’s first capital and the birthplace of the kingdom.

From Porto, the highways head north toward the coast, Braga, Guimaraes, and Vidago. Braga is considered the Portuguese Rome for its vast array of churches and shrines. It also dates back nearly 2000 years – founded by Roman emperor Augustus – and has the oldest cathedral in Portugal. A university town similar to Coimbra, Braga deserves a day to explore.

Guimaraes is the birthplace of the Kingdom of Portugal. It is here that the first king of Portugal was born, and also here where he battled for the title of King. (Against his mother, because no history is complete without a little Game of Thrones competition, right?). The historical center of Guimaraes takes about a half to full day to explore, depending on your interest. Along the coast, there are numerous small towns with little tavernas, a strong maritime heritage, and excellent beaches. As Portugal is mountainous, expect to also find hiking trails that wind along cliff edges – all with amazing views, of course.

Should You Stay in Porto or in the Douro Valley?

There are several factors to consider when you’re thinking about where to stay. Staying in Porto allows you the freedom to explore the city and the Douro Valley as well as head north to see some of the small coastal towns. However, I suggest doing a two or three nights in Porto, then heading north for a few days, and then finally back south into the Douro before continuing on. There are some incredible luxury hotel properties across Portugal. Every single room at The Yeatman, in Porto, has this view of the old city.

We only toured the two Virtuoso hotels in Porto, however there are plenty of mid to high-range non-Virtuoso hotels. Luxury-wise, there’s the InterContinental in the heart of the city. The rooms are quite small, but its great for a night prior to boarding a river cruise. Porto’s InterContinental Hotel is ideal for business travelers or those with just a day or two in the city.

The InterContinental is also very central, ideal for walking around the city. The Yeatman, by contrast, has spacious rooms, all with private terraces and all overlooking the old city. The Yeatman is located across the river in Vila Nova de Gaia, but its very easy to get across, either by taxi or by walking across the Luis I bridge.

For travelers with reward points, of course there is the InterContinental (IHG), but there is also a Crowne Plaza and a Sheraton (Starwood Preferred Guest). As Porto is so small, nothing is too far to walk, but taxis abound. Six Senses Douro Valley sits snugly into the landscape in an old manor house. The new additions only increase the splendor of this five star hotel and spa.

Hotels in the Douro Valley

In the Douro Valley, I stayed at the exceptional – sensational – Six Senses (above). There is nothing comparable, and its a wonderful place. If you’re unfamiliar with the Six Senses brand, think five-star service blended with local culture and food, sustainable thinking, and a seriously incredible spa. The Six Senses spa is one of the largest hotel spas I’ve ever seen. I highly recommend staying here to savor the farm-to-table food, indulge in a spa treatment, and then continue on your journey. There are some small wineries with boutique luxury hotels nearby, but otherwise you’ll have to head for one of the towns. Taylors, one of the major port houses in Porto (adjacent to The Yeatman), owns The Vintage House Hotel, a stunning converted lodge in Pinhao.

Guimaraes, the first capital of Portugal, has some mid-range, locally owned hotels. The nearby Casa de Sezim (above) is a winery and boutique hotel located in a 13th century home – still owned by the same family. Vidago, in the north central region, is home to Vidago Palace Hotel, a large mansion set into a park, with a golf course and hiking trails on property. There is also a healing spring on property, where you can still drink from the natural sparkling waters. According to legend, the waters are supposed to settle stomach pains, aches, and other maladies.

As I noted in my Lisbon post, Portugal is rising quickly through the ranks to become a favorite European destination. The northern region remains, to an extent, a hidden gem.

We stayed at the Yeatman and Six Senses last year. The Yeatman was great (book the suite with the wine barrel bed which has an amazing balcony and yes with magnificent views of Porto). As far as the Douro Valley, if you can afford it, stay at the Six Senses. It is Amazing with stunning views and a gorgeous property.

Kevin – great to know you loved both! I stayed at The Yeatman on my first night, we toured the property and saw the suite with the wine barrel bed .. must have been fun to stay in! My room, one of the second category ones, was also spacious with a gorgeous terrace. Definitely a fantastic property. As for Six Senses, I had nothing bad to say. I definitely agree, if you can afford it, it’s the best of the best of the best.

Thanks Mark. I’ll edit. I had wondered if that was seasonal as I did a flight search on the matrix to find nonstops from US to OPO and hadn’t seen any, but I think I picked November dates just to get a few months out.