Alitalia MilleMiglia just made a huge devaluation to their award chart with no explicit announcement. In some cases, the awards now cost more than double.

Previously, you could fly roundtrip between Europe and the US for the following prices. One-way tickets were available at 60% the cost of roundtrip. 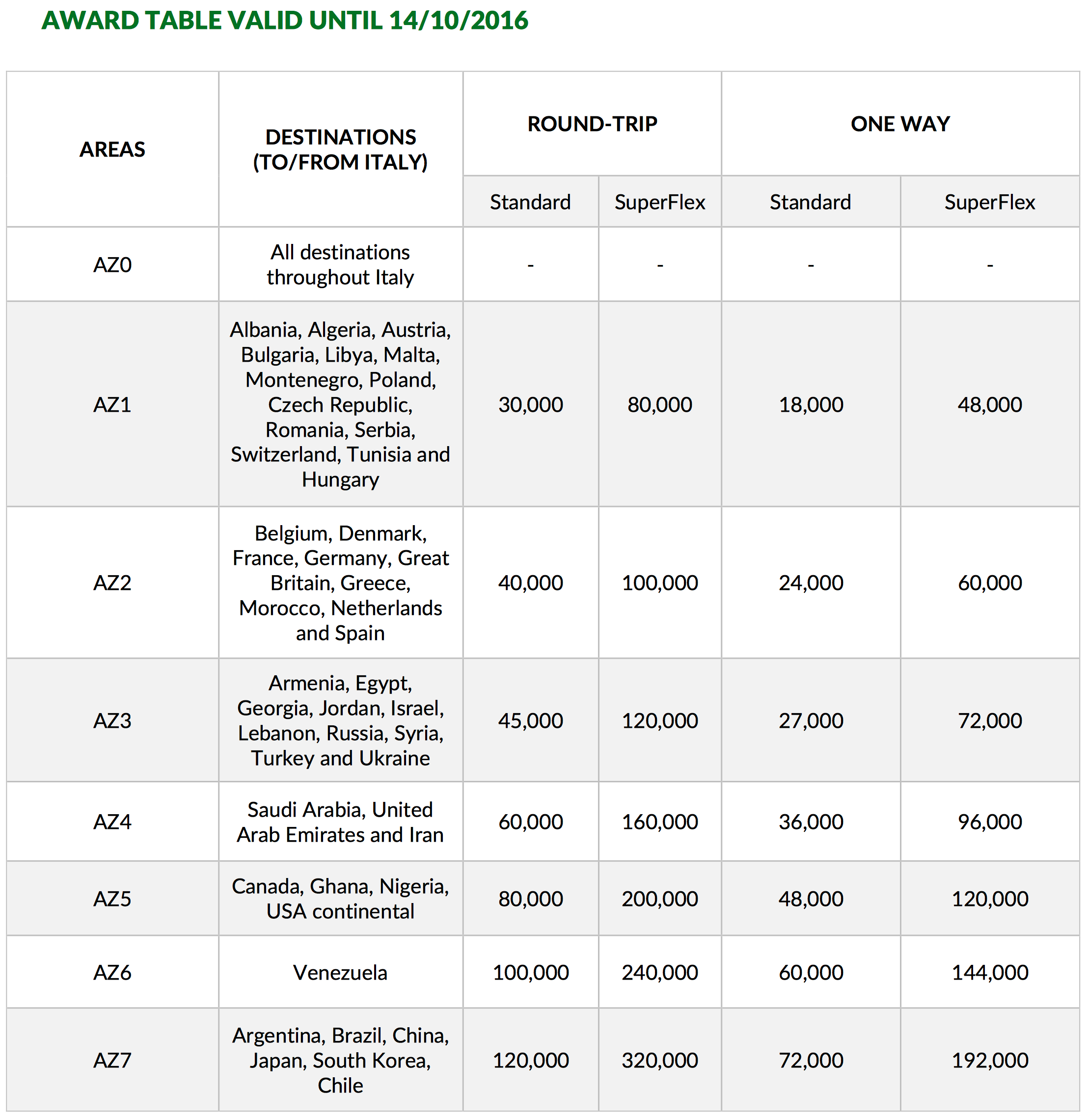 80,000 miles for roundtirp travel to Europe is a pretty good deal. Alitalia does levy fuel surcharges on their tickets, but you can book Delta flights using Alitalia miles without fuel surcharges, making it an attractive redemption. Additionally, both SPG and American Express Membership Rewards partner with Alitalia MilleMiglia, so Alitalia miles weren’t too hard to accrue.

As you can see, Business Class more than doubled in price. The changes are already in place, if you try to book an award today. Alitalia is now charging 100,000 miles one-way for Business Class between Europe and the US

Previously, Alitalia also offered a tier of “SuperFlex” award, which costs 2- 3 times, but also have access to more seats. Currently, it looks like the new “Business Flex” is simply a reflection of the airfare. With the example below, a Business Flex ticket costs 10x the miles of a Standard Business award ticket. Strangely, it still doesn’t look like Business Flex means last seat availabiity, since there are quite a few flights where Business Flex isn’t available.

To be compltely fair here, the award chart did say “Award Table valid until 14/10/2016.” However, they never made an announcement as to what the rates will become after that. For that matter, Alitalia still has not made a new award chart available, and the lack of an explicit announcement is troubling.

What’s also annoying is that American Express is currently offering a promo, where you could transfer Membership Rewards point to Alitalia with a 25% bonus. This offer has been in place since October 1, and is valid until the end of the month. If Alitalia had anything to do with this promotion (other than just AMEX), it seems pretty bad form to offer a promotion, and then double the award cost.

Alitalia is a member of SkyTeam, so there are still plenty of other ways to book their tickets. They are also an Etihad Airways partner, and Etihad actually purchase a 49% stake of Alitalia 2 years ago.

More Details on the Alitalia Devaluation, and the New Partner Award Chart

Do I Need To Carry My Passport In...

More Details on the Alitalia Devaluation, and the...