Cathay Pacific Rolling Out New Amenities, Here’s What They’re Like

Cathay Pacific released a press release this week officially unveiling their new in-flight amenities in both business and first class. I updated the list of amenities below to reflect the announcement. Last month, I got a chance to try the new products during their soft launch on a first class flight between Hong Kong and New York-JFK via Vancouver.

Amidst the protests and ongoing crisis in Hong Kong, travel in Hong Kong is down as expected. Hong Kong’s flag carrier, Cathay Pacific, has been embroiled in the turmoil. With things not looking to turn around in the short to medium term, Cathay Pacific has begun cutting routes.

Even with passenger numbers and revenue down, Cathay has also quietly begun to roll out new amenities in first and business class on long-haul routes. These changes were already in planning before the recent round of protests erupted in Hong Kong. The soft product revamp started October 1 and encompasses amenity kits, bedding, and even a refresh of first class dining.

I flew from Hong Kong (HKG) to New York (JFK) via Vancouver (YVR) in first class a few days ago and tried out the new Cathay amenities. Note that the Vancouver to New York fifth freedom route will sadly disappear next year.

Upon boarding, I received a booklet explaining the new Bamford amenities and was handed the Bamford kit. I had never heard of Bamford before, but a quick search for their products showed they’re fairly pricey, albeit a newer company. The marbled leather exterior felt appropriately high-end and there was a handy exterior pocket. Inside, there was a “three-step sleep ritual” which basically meant there was your standard moisturizer, lip balm (the twist-out variety), and a facial mist. These were slightly larger than sample size and the packaging had a nice weighted feel to it.

Besides the skin products, there was a toothbrush, earplugs, and toothpaste. The Bamford kits felt a little “empty” on the inside — when I took everything out, I was half expecting there still to be something inside, if that makes any sense.

Also, if you thought the Aesop amenities were fragrant, wait until you try these products. While I do like the smell, these definitely have a very musky smell that could be off-putting to some. At least there are separate male and female amenity kits. First, the bad news. While the booklet contained information about a “pillow menu,” cabin crew had no idea what I was talking about, and it was clearly not yet stocked onboard.

However, the pillow that was waiting at my seat already was a massive improvement (and also, just massive) over the previous first class pillow. If this pillow is even remotely similar in business, I can’t imagine how much of an upgrade that will be. The current Cathay Pacific business class pillow is flat, small, and kind of sad looking.

At turndown, I was given a second pillow that was the same as the first along with a nicely scented lavender “pillow mist.” While my flight from Hong Kong to Vancouver had the new amenities and bedding, my leg from Vancouver to New York had the old stuff so I got a good comparison between old vs. new.

The new Bamford mattress pad may have been slightly thicker, but I didn’t notice a huge difference between the old product and the new one. The new duvet was great, and I think an actual improvement.  It was thick and soft while still being somewhat cooling. That last point is important since Cathay cabins can get warm, and there are no adjustable air vents.

As mentioned, the pillows were the star of the show though, and I slept almost eight hours interrupted — some of the best sleep I’ve ever had on a plane. While I was generally exhausted, the bedding definitely helped as did the wide Cathay Pacific first class seats. According to FlyerTalk and the booklet, a new first class menu is also coming soon but wasn’t yet available on my flight. Overall, food quality was not great on this flight, so I’m hoping there will be an improvement with the new menu. 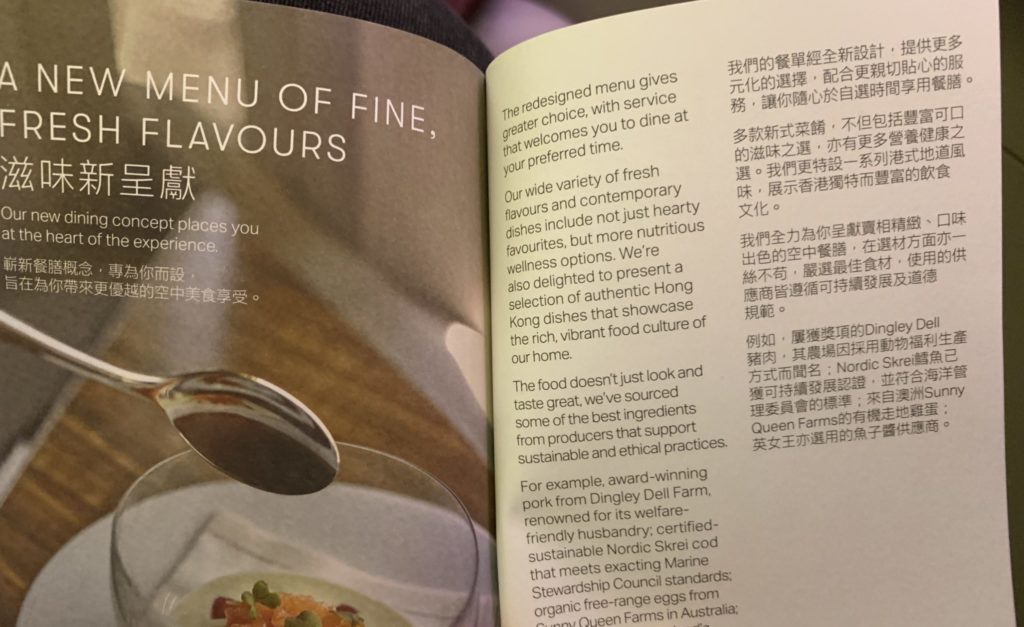 While I don’t think these changes are groundbreaking, the new amenities in Cathay Pacific first class are definitely an upgrade overall. In an era of cuts, that’s saying something. Cathay first was already my favorite place to sleep at 35,000 feet, and this only solidifies that. The biggest downside is dining right now, but hopefully that will change with the updates to come.

For business class, the new amenities and bedding will be even more of a significant improvement. It baffled me that an Asian airline didn’t provide slippers to its business class customers — until now.

Qantas Website Crashes Due To $100 Sale Fares, Tomorrow Is Round 2

What about Pajamas, or pyjamas depending…?

Pajamas in first are staying the same with a design by Pye. Good quality, but definitely run a little big.

What did they have for Champagne?