This is an interesting twist! Earlier in the week we reported that in addition to the Central Terminal renovation that has already begun, Delta plans to replace LGA Terminals C & D w/ a new 37 gate terminal. Delta is covering the bulk of the expenses for the new terminal and Bloomberg is now questioning whether Delta might ask for something in return…

One question that arises is what Delta may want in return for its magnanimity. Aside from its role in the renovation, Delta has also been seeking to have the Port Authority scrap a regulation limiting flights at the airport to 1,500 miles. The “perimeter rule” has been a critical factor in how airlines have structured their schedules at the other two city airports, Newark Liberty International, a United hub, and JFK, the primary home of JetBlue Airways Inc. as well as a Delta stronghold.

The full project is expected to finish in 2022. As part of it, LaGuardia may well have a new feature the Port Authority isn’t ready to discuss: nonstop flights to the West Coast.

Check out the full read here. 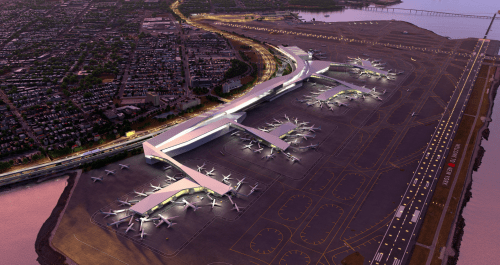 Why You Should Always Get a Window Seat When You Fly

[…] day prior to Delta’s big LGA announcement (see – Delta to Request End of LaGuardia Perimeter Rule in Exchange for Covering LGA Terminal Redevelopment…), they officially announced a terminal relocation and $1.98B renovation project at LAX. Delta will […]