Mixed Feelings on the Reconfigured United 757-300 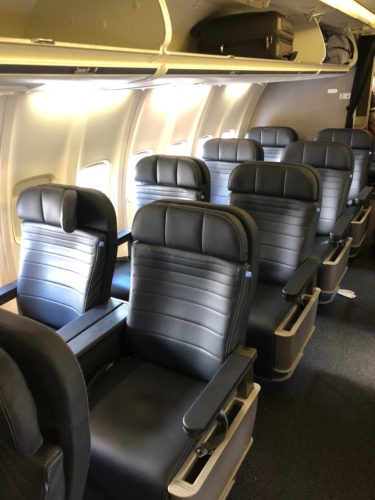 United Airlines operates a small fleet of 21 757-300 (753) aircraft, a high-density domestic workhouse flying primarily on hub-to-hub and leisure-heavy routes. United announced last December it would install slimline seats on the stretched 757 variant, increasing capacity by 21 seats. Nine of United’s 757-300’s have been reconfigured to also include the new(ish) domestic first class seats found on A319, A320 and 737-700 aircraft.

DIRECTV seatback screens were removed in favor of streaming entertainment. Other cabin amenities include:

I recently flew the reconfigured 753 from Chicago (ORD) to Denver (DEN) in United First on an unpleasantly early 5:30am departure. I adore the 757 for short domestic hops. Entering the cabin and turning left to the first class cabin is always a treat.

Prior to the reconfiguration, I avoided the 753; the ratty interiors were among the worst in United’s fleet. I finally experienced the new configuration and was pleased to find the new(ish) domestic first class seats installed in the same 24-seat configuration. The new seats are a major upgrade from the relics of the Continental era. Economy class also received a refresh with slimline seats in the new signature leather design.

The refreshed cabins include a few design elements from PriestmanGoode, the firm who designed new cabins on the Boeing 777-300ER and Boeing 737 MAX 9. Here’s a cabin mockup for the new 737 MAX: The new branding is corporate-contemporary, in other words, pleasant but hardly groundbreaking. Here’s what it looks like on the bulkheads of the 753, to the left. I like the new United First placard against the earth-toned bulkhead. It’s a major upgrade from the previous brandless bulkheads.

Unfortunately United did not install the globe motif (left above) found on 777-300ER aircraft. I would have loved to have seen something similar on the entryway for this plane.

The first visible change upon entering the aircraft is a reduced half-galley by door R2. The half-galley now faces the aisle and offers no privacy for flight attendants. The new galley was partially renovated, but it still looked about as old as the plane.

To make room for 21 new seats, United also removed one lavatory and the aft closet. The crew did not seem pleased about the galley changes. Also, note the paired seats in the new configuration at rows 7 and 22.

The new first class seats are nice; the economy class seats look much better, and the bulkheads are a welcome change. Beyond that, the plane looks anything but fresh. Would it have been hard to install mood lighting to replace the harsh yellow overhead lighting? Or to enhance the abused galleys with a few cosmetic changes?

I know United is capable of full renovations; the recently acquired ex-China Southern A319s received new cabins from carpet to galleys. They look factory-fresh, unlike the Boeing 757-300.