This is part one of an eight part trip report from my recent travels to Estonia and Finland. This report covers my KLM B747-400 flight from JFK-Amsterdam (AMS) in business class. This was a unique flight in that I was the only passenger in business class, all by myself on the upper deck! JFK Oasis Lounge Terminal 4 – KLM business passengers are invited to use the Oasis lounge which is located land-side PRIOR to security in terminal 4. The lounge is also open to SkyTeam Elite Plus members and those with a Delta Sky Club membership. I had visited the club before and although adequate, I never thought it was anything special. It does however have some fantastic plane watching vantage points as well as a nice bar. Sandwiches and snacks are available in the early afternoon, while two hot options are available in the evening. Passengers flying with Air Europa, China Airlines, Copa, Etihad, PIA, and Singapore amongst others also utilize the lounge. You can also gain access using a Priority Pass membership (AMEX Platinum) or via the Lounge Club (Ink Bold / Ink Plus).  As I was running late and had been to the lounge before, I decided to proceed directly through security and to the gate. However, Jake from modhop has a great detailed video review of the lounge.
KLM B747 – Business Class – KL 642 is normally operated by a 777, but was swapped for a 747-400 on my travel date. I was seated in seat 2B on the top of the B747. As I boarded (pretty late), I thought it strange that there were no other passengers up top. I was offered a choice of water, champagne, or orange juice as I waited for my fellow passengers to board. After about 15 more minutes, the boarding door was closed and I looked around to find myself as the sole passenger on the upper level! OK, this was going to be interesting, my own private cabin for about a 7 1/2 hour crossing over the Atlantic. There were two flight attendants watching over the business cabin, but one of them ended up going downstairs to assist everyone else. The flight attendant handed me the standard KLM amenity kit which contained a comb, lip balm, a toothbrush, pen, eye mask, and socks. KLM has since announced a much improved amenity kit that is being rolled out in phases throughout 2013. Food – Dinner choices included a crab and salmon appetizer followed by either halibut, chicken, or braised beef. Breakfast options were a caramel apple turnover or tomato leek strata. I decided on the chicken and the tomato leek. On Board service timeline…

I really enjoyed my appetizer, the chicken dish, and breakfast. The chicken was moist and had great flavor. Of course, I had very attentive service being the only one upstairs. You’d think with such a private cabin, I would have had a great night of sleep, not the case! The KLM business seats make sleeping quite difficult. They are not lie-flat and you are sort of stuck in that awkward hanging off the seat position. I definitely would have preferred the Delta 767 lie-flat seat. Luckily, KLM has announced a brand new business class product (the seats look excellent) and they will first be available on the airline’s 22 Boeing 747-400s.  July 2013 will see the inaugural flight of the first updated aircraft and the 747-400 fleet should be completed by April 2014. Work on KLM’s 15 Boeing 777-200s is planned for the summer of 2014. 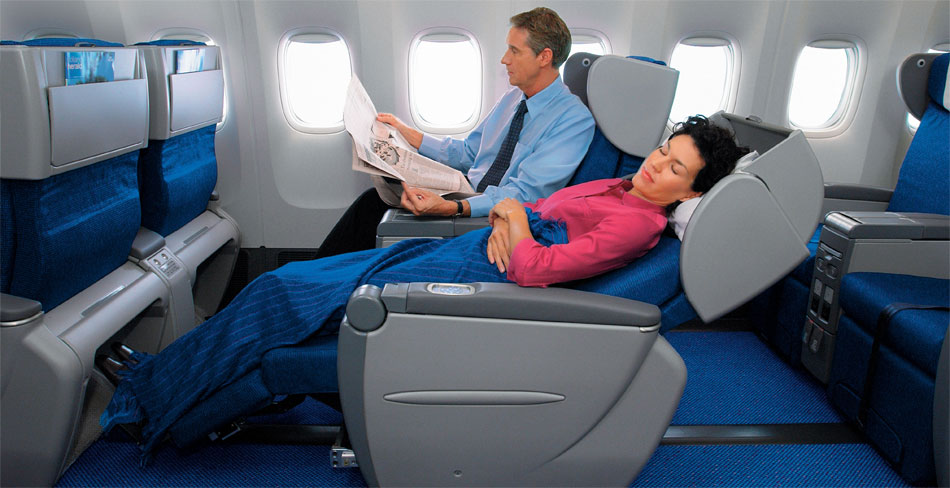 Once meal service was over, I was completely on my own upstairs and it was quite strange. At times throughout the night, it was pitch black and I saw no one else for what felt like hours (though the flight attendant did come up every so often)! Believe it or not, this was my second time up top alone, the first on an AAdvantage Qantas first class flight reward several years ago on Christmas Eve. The in-flight entertainment had a decent selection (about 9 new releases) on a 10.4″ screen. The IFE was adequate but certainly doesn’t compare to the much larger selections (and screens) currently available on many other carriers. IFE is set to improve as well, with much larger screens and an enhanced media selection planned for the KLM business class upgrade.
All in all, I really enjoyed the food and the private cabin experience. Service was excellent and I had absolutely no problems. Sleeping could have been better and it will surely be vastly improved with the roll-out of KLM’s new business seats.  One more KLM Dutch house to add to the collection… Interested in using your miles for a flight on KLM but can’t find availability? Consider using Juicy Miles for award booking assistance!

SPG 2013 Member’s Favorites – How Many Have You Been To? The True Value of SPG Points

ahhh JFK terminal 4! You’re right that the Oasis Lounge, for the most part, is nothing special, but during the holidays it’s actually one of my favorite lounges. I recall you’ve been to the Emirates Lounge (airside of Terminal 4) and in terms of food alone it’s a lot better than Oasis! However, during the holidays, the Oasis Lounge has awesome holiday decor (including a christmas tree even) and the library area with the large wooden table felt so cozy that I really preferred its character more than Emirates’s during the same time period.

man, those business seats are out dated…still, id love to fly KLM someday…never flown them before. thanks for the interesting TR

And I’m sure you know what the surprise is inside the Dutch House!

So you are saying you had the cabin alone for 8 hours with one flight attendant?