76,198 Points for a Roundtrip JFK-Boston Flight! Boarding for my second flight began 15 minutes before my first flight was even scheduled to arrive…I love this stuff!

I registered for the JetBlue Points Match back at the end of June, but I hadn’t had a chance to take a flight. With the 8/31 deadline approaching and a trip to Europe planned from the end of August -September, a JetBlue fare sale helped me fulfill the one round-trip requirement. I purchased a 6AM flight from JFK to Boston (BOS) and then a return flight from Boston to JFK at 9AM for $49 each. I did need to get into work today though and with the weather was clear in both locations, I was hoping to get on the 730AM flight from Boston. That flight was approximately 20 minutes after the JFK flight was scheduled to land, though boarding would be closing 5 minutes after I was landing.  I therefore knew that I needed to get myself on the standby list at JFK and that I couldn’t wait until I arrived at Boston.  I arrived to JFK a little early to ask…the agent looked at my arriving flight and was very confused.  I explained the situation (she loved it) and she was able to add me to the list with the assistance of a supervisor. They wished me good luck and told me to come back if I made it. Off to Boston…

Our flight actually landed a bit early and I was in the terminal by 655 for the 730 flight. We came into gate C15 and the JFK flight was departing only three over at C12. I approached the gate just as they asked for standby passengers to make themselves known. Boom, ticket issued and exit row seat! I was on my next flight by 7am, 10 minutes prior to the arrival time for the first.

Upon landing I headed back upstairs to the help area and found my agents!  They literally started hysterically laughing, jumping, and screaming “Go Adam Go” as I approached.  We all celebrated together, they were truly awesome.  As I predicted to them before the first flight, I ended up at work about 30 minutes earlier than normal for a Friday…and had a little bit of morning fun. 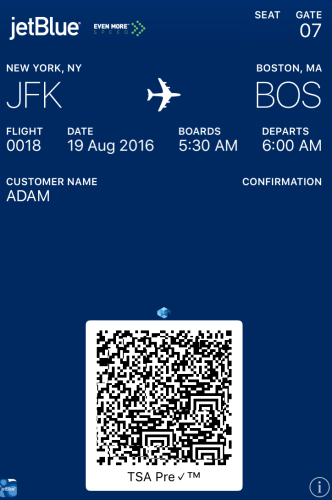 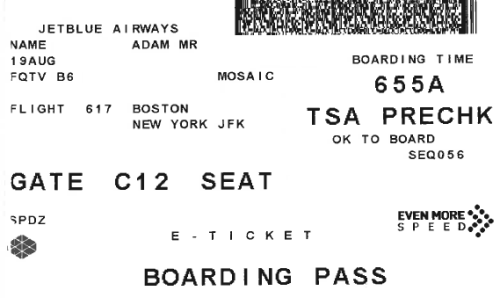