Pastries were everywhere in Lisbon. I’ve never seen so many pastry shops, pastelarias, and so many different kinds of pastries. King of all: Pastel de Nata, a Portuguese egg tart pastry originally from Portugal but also found in countries with significant Portuguese immigrant populations. My where to eat the best Pastel de Nata began!

Which Ones Should I Sample?

The question became how to narrow it down to which ones to sample. I asked some born and raised Lisbon friends to narrow it down for me. Seems like everyone has a suggestion about where to eat the best pastel de nata, and that’s a good thing! They suggested I start with Fábrica de Pastéis de Belém in Santa Maria de Belém.

On my first full day in Lisbon, a friend who lives there picked me up from my Sheraton. Of course I let him plan the day.

While walking to his car, we stopped for my second espresso of the day and it was only 9:30 a.m. Those espressos go down way too easily!

As he drove, I had a hunch where he was heading, and I was right. As we pulled into the parking space I saw Pastéis de Belém. 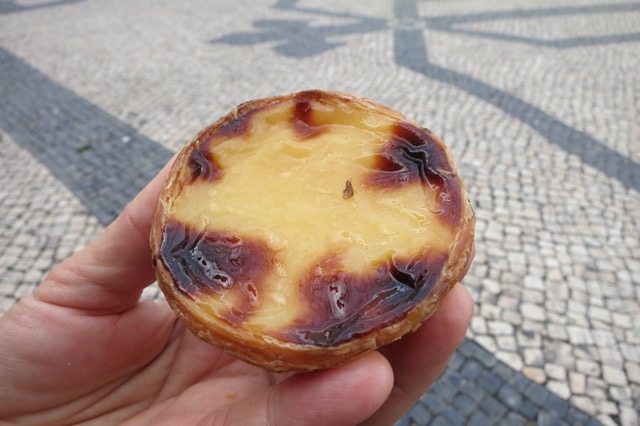 Pastéis de nata was created before the 18th century by Catholic monks at the Jeronimos Monastery in Lisbon. It’s perhaps Portugal’s most famous dessert and can be found just about everywhere around Lisbon. But there is a catch. There is a secret recipe that’s closely guarded here at Pasteis de Belém.

Learn about travel rewards credit cards that can get you to Portugal!

These monks were originally based in France where these pastries could be found in local bakeries. At the time, convents and monasteries used large quantities of egg-whites for starching clothes, as nuns do.

How To Create A Market for the Pastry

It was common for monasteries and convents to use the leftover egg yolks to make cakes and pastries, resulting in the proliferation of sweet pastry recipes. Following the extinction of the religious orders, in the face of the impending closure of many of the convents and monasteries in the aftermath of the revolution in 1320, the monks started selling pastéis de nata.

They sold them at a nearby sugar refinery to bring in some revenue. In 1834, the monastery was closed and the recipe was sold to the sugar refinery, whose owners in 1837 opened the Fábrica de Pastéis de Belém. The descendants own the business to this day.

Miguel Clarinha, his father Pedro and cousin Penelope run Antiga Confeitaria de Belém, the bakery and shop that has been in this family for four generations. It was officially opened in 1837 by Domingo Rafael Alves, unrelated to Clarinha’s family, who started production of the tarts after the secularization of the monasteries by the state in 1834.

The recipe that still closely guarded today has its origin in the pastel made at the nearby Mosteiro dos Jeronimos, and many say remains one of the most tightly guarded culinary secrets in the land.

The shop has a loyal following because they’ve managed to maintain their unique identity over the years, Clarinha said, protective of an original recipe that’s remained in high demand. The pastries are baked at 400 degrees Celsius.

The best custard tart (unsurprisingly) is one made according to this recipe.

“It’s a unique recipe combined with selected ingredients,” he said. “The fact the pastel are still handmade makes the difference. It is the combination of crispy slightly salty pastry with the sweetness and smoothness of the cream that makes a perfect pastel.”

This Is One Popular Bakery!

I had heard that the lines to get into this bakery were always outrageously long and to always be prepared for a long wait, but my local friend knew just how to navigate what turned out to be a huge establishment. In a few minutes we were seated and he had ordered.

Even before the warm tarts arrived the whole place smelled like butter and cinnamon. After this first taste, I knew I would compare these nata to every future pastéis de nata I’d consume. They were flaky and buttery rather than greasy. The custard wobbled but isn’t at all loose. The nata came with a dusting of cinnamon. What held me back from ordering more was knowing I’d be eating these pastries every day and sampling them at as many places as I could!

I read an interview with food guide Célia Pedroso, and thought she put it well.

“The filling shouldn’t be very sweet and shouldn’t have any flavors of lemon or vanilla,” she said.

A purist when it comes to the classic pastéis de nata, Pedroso goes on to explain that even good bakeries and cafés around Portugal who’ve tried to be inventive, just spoil the product in the end.

“Just cinnamon sprinkled on top is simply the best pairing for an espresso,” she said. Sharing that her favorite bakeries are Manteigaria in Bairro Alto (which I can attest to being very good), and Antiga Confeitaria de Belém.

And the best time to eat them?

“We eat them at any time of the day, with the morning coffee, in the afternoon.”

As I thought, pastel de nata does taste slightly different from place to place. What it comes down to is the pastry and the filling and how you like them: flaky vs. greasy, or custard filling more wobbly vs. dense.

I did indeed try many places that served pastel de nata. Please note that the general cost of a pastel de nata is 1Euro and there is absolutely no reason to pay more!

Best Bets For Where to Eat Pastel de Nata

1. Pastéis de Belém remains my top choice, and one must for sure you must make a trip to Belem at least once while visiting Lisbon. It’s a charming area, with the monastery to visit and historic monuments on the waterfront side.

2. Manteigaria. The location in Bairro Alto is a crazy place. It’s also a crowded, small space. If you don’t want to stand at the counter and drink espresso with your pastel de nata, I suggest you do take-away. Go in, shout your order, hand over your Euro, and you’ll get your pastel de nata in a small box with sugar and cinnamon packets.

I loved this box idea……brilliant, really. Then off you go to the park or fountain across the street to grab a seat and eat them. The pastry is great. Though the custard isn’t as firm as some of the other pastel de nata, it was delicious. 3. Pastelaria Versailles. If you stay at the Sheraton Lisboa as I did, this Pastelaria is a short walk away. Their pastel de nata offers a good combo of great crust and firm custard. And Versailles is the best place of all to sit and enjoy a pastry. You’ll also enjoy the wonderful old world ambiance and people-watching opportunities.

4. Fabrica da Nata: Fabrica’s pastel de nata were on the greasy side though they were served warm and right out of the oven. Though the pastry was greasy, the custard was great.

It’s a fun place to visit. You can watch the bakers making nata There’s also a nice upstairs cafe with big windows from which you can watch all the action on the streets. 5. At Your Hotel. The staff at the Sheraton Lisboa laughed when they heard I was all over town tasting pastel de nata. They wondered if I had found where to eat the best pastel de nata. They decided I needed to taste the ones at the hotel. The hotel staff said they were great! Room service knocked on my door one afternoon and voila, a beautiful plate of pastel de nata appeared!

There was a lovely presentation which included some fruit as well as sugar and cinnamon for the nata. They were quite good! Could you spend your whole vacation sampling different pastel de nata around Portugal? Absolutely. Could I eat them every day? Yes! (I did).  If pastel de nata isn’t to your liking, stay tuned. I have another article coming up about various pastries to sample in Lisbon. You didn’t think I’d forget to try all the other amazing pastries, did you?

Using American AAdvantage Miles on Flights To and From India

Hyatt Has a ‘Mystery Bonus’ Points Offer. What’s the Mystery?