American better watch out, it looks like Erin Brockovich may be getting involved with the AA uniform issue! According to the Chicago Business Journal, Brockovich is monitoring a private Facebook group where front-line American employees are reporting uniform issues. How about some pentachlorophenol, tetrachloriphenols, trichlorophenols and free and partially-releasable formaldehyde with your uniform? These chemicals were found after independent testing was performed on the fabrics from the new American Airlines uniforms that are causing hives, swollen eyes, rashes, and more. Believe it or not, many of these are “accepted limits under Oeko-Tex Standard requirements for certification of textile products” according to the Chicago Business Journal.

The AFPA says that they will continue investing resources in the investigation until all employees are safe and comfortable.

As previously reported, American recently set up a call center to take adverse reaction reports and anyone reverting back to the old uniform must first report symptoms to the call center. As of October 15th, 194 reports had been filed with the call center.

APFA is conducting its own set of tests, and AA management is conducting another set with a testing firm selected by APFA. But such tests are expensive and time-consuming. AA’s Vice President of Flight Service Hector Adler put the cost of a fabric test at around $130,000, and the process could take between six and eight weeks, he said.

“Eight days ago we opened a call center because the safety of our employees is our top priority. We encourage anyone experiencing issues with their uniforms to contact the call center and find the solution that works best for them.” 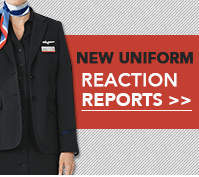 I’ve had several respiratory problems regarding the new uniform. I’m wearing my old uniform and have had no problems since. Keep me posted thanks