The Amazing Buffet at the InterContinental Hong Kong

I grew up in Hong Kong (have I not mentioned that enough?) and my idea of a “buffet” has always been an extravagant spread of high quality food at some high end hotel. This is probably why when my relatives took me to a $6.99 Chinese buffet shortly after I moved to the U.S., my jaw basically dropped to the ground. …and not in a good way.

It also explains why my return to the InterContinental Hong Kong dinner buffet was a refreshing experience. I must apologize in advance, as I really don’t have much to say about this buffet other than the fact that it was amazing, so this is going to be more like a photo gallery.

I booked the dinner buffet at the Harbourside restaurant inside the InterContinental Hong Kong. At almost USD 120, it was an expensive dinner to say the least, but I had heard amazing things about the food quality and assortment of dishes, so I decided to give it a try. I also hadn’t been to this buffet in 11 years, and was very eager to see what has changed.

The buffet was divided into four main sections. There was a bread/appetizer section, a cold and raw section, a section with hot food offerings, and a dessert table.

The restaurant was located down a flight of stairs, and the dining area faced Hong Kong Island. The only thing that separated guests and the harbor was about 30 feet and a thick pane of glass. The view was absolutely killer. The restaurant was very crowded—it seemed like the USD 120 price tag didn’t stop people from coming. To begin, there was a side table with a good selection of bread and cured meat. The bread section led up to a table of cold seafood, which included crab legs, lobsters, crab cakes, as well as sashimi and sushi (to name a few…the number of choices were so plentiful that I can’t possibly list everything). A few different types of salads: For my first dish, I grabbed a few cold items. There is a variety of juices included in the base cost of the buffet, though I usually just drink water when I’m at a buffet. Moving onto hot food. The end of the table had a grilled meat section (which also had many choices of sauces) and two types of soup. A number of pre-made dishes were situated at the center of the hot food table. At the other end of the table was a chef who was in charge of lamb shank slices and freshly seared foie gras. 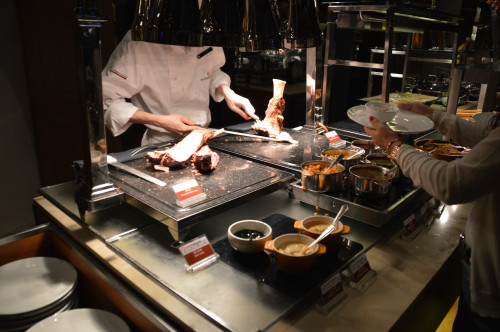 For round two, I had foie gras, pork belly, some dim sum, sea cucumber and abalone (both Chinese delicacies), and Indian lamb curry. The dessert section was so extensive I’m just going to let the pictures speak for themselves. Prepared-to-order options included ice cream, pancakes, and soy bean curd. Also of note were all-you-can-eat macarons and a chocolate fountain (I only mentioned the chocolate fountain because quality-wise, it was from another world when compared to the ones you might see inside Golden Corral). Finally, it’s worth mentioning that the restaurant is a prime spot for watching the Symphony of Lights in the harbour. (Off topic: it’s such a great spot that it was featured in the Apple Watch commercial!)

Great pictures and excellent review. I am returning to the IC for 6 nights in September and fully agree with you that the buffet is amazing. And if you get too spoiled by the impeccable service and stellar views, you can always just walk across the street for afternoon tea at the Peninsula.

Beginning of April, I stayed one day in the IC and two days in the Renaissance.IC is great, room views are spectacular, but I felt i got better service in the Renaissance. I have low tier gold status with Marriott, but I got upgraded harbor view room, roll away bed free, lounge access, huge bowl of fresh fruit. I think I like better 4 star hotels, 5 star hotels don’t give you much more but everything is more expensive.

For US $120, thanks but no thanks. I am sure it must be a very luxurious breakfast and some people are OK but for me, unless they serve gold and diamonds in the plate, I will pass.

For $120 if you are a seafood fan you can probably get your money’s worth. But unless they are serving Kobe steaks not really worth it. Your in Hong Kong! A meca for great restaurants and dining choices. Is a hotel buffet really the best choice!

i am gooing to Hongkong in May and this is one of my favorite hotels, but it is very expensive. It has the best view and the best pool, i guess. still thinking about….

So the big highlights of your Hong Kong visit thus far that you deem worth blogging about are paying $50 for afternoon tea and $120 for a hotel buffet dinner? Sorry, but I have to give you a D- for worthwhile Hong Kong information. On the other hand you earn an easy A for pretension.

[…] Part 10: The Amazing Buffet at the InterContinental Hong Kong […]