Just prior to the end of the 100K in-branch offer for the Chase Sapphire Reserve earlier this month, I applied and was approved thanks to a pre-approval on my account (despite being rejected for 5/24 in December).

At 6/24, I got very lucky, especially based on the experiences of others like Miles.

On a high, that same day I figured why not also see if I was targeted for the Ink Business Preferred since the new CSR card would not yet show up on my credit report and the two pulls would likely be combined. Unfortunately, the branch had no business offers for me. I went back to my desk at work and immediately applied online for the Ink Business Preferred card. I was happy that the system didn’t automatically reject it which often happens when applying for two Chase cards on the same day (I assumed that this was due to the fact that one was an in-branch approval). I received the 30 day message, a somewhat positive sign.

I waited about a week and didn’t hear back at all. I made the call into the reconsideration line and was told that the application had not been processed because they had tried calling numerous times. They wanted to verify a few of the details about my business. Once that was complete, the agent was not able to approve my request due to my large existing credit line with the bank.  I was concerned that the 35K CSR credit that they had just offered me would be a hinderance to gaining approval, but the agent said that after reviewing my profile, he thought I didn’t have much to worry about (total Chase credit was in the 68K range). The application was off for second level approval.

After about a week, I still had not heard back. That is until I was greeted with a postal letter on Tuesday of this week:

Thank you for your business card application for a CHASE VISA Signature credit card.

We reviewed the information in your application and credit report and we are unable to approve your request at this time.

Here is the reason(s) for our credit decision:

Ugh, I was really disappointed, everything seemed so positive and it felt like I might just get away with another approval piggybacking on the luck of my CSR card. I called back into the reconsideration line and talked to an agent. I do have to say that the business agents seem much more open to discussing rejections due to 5/24…likely because the personal ones were inundated for months with calls for the CSR and likely got sick of us!

I tried to talk common sense with the agent, something that’s always tricky when there are strict rules (and a script of generic responses) that have to be followed. I explained that there is no way that my credit report could look any different from when they approved me for the CSR earlier that day and it seemed ridiculous that one card would be approved while the other was rejected, especially when they both have to follow the same 5/24 rule (of course I didn’t mention the in-branch pre approval). Hah, she actually agreed with my argument! She was curious as to why I needed both cards and I explained that I like to keep my business expenses separate, but yet want to earn Chase Ultimate Rewards for all my purchases. She then agreed to resubmit the application and directly document the same-day approval for the CSR in the notes section. It might seem risky to call out my own CSR approval post 5/24, but I didn’t think it was possible for them to reverse that decision, especially since I already had the card and was using it.

Yesterday morning I woke up to this email from Chase: 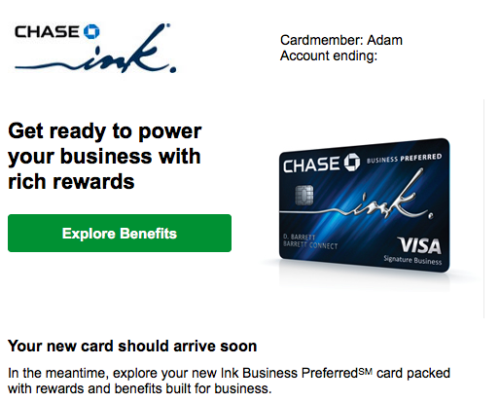 Yes, I seemed to have negotiated my way to an approval for the Ink Business Preferred card! Of course, there are rumors that the sign-up bonus could increase to 100K in the coming weeks, but I was more concerned with pairing the two applications together and applying while I was still at 6/24 rather than 7/24 post CSR.  180K sign-up points in one day for two cards that have strict limitations for those in our community, I’m calling myself VERY VERY lucky!

[…] The Hyatt Credit Card  – Chase and Hyatt will be removing the 2 free nights sign-up offer on June 29th.  Going forward, new members will receive 40,000 Hyatt points instead of 2 free nights at any global property. If you like staying at Hyatt’s top tier properties (category 6 or 7), the 2 free nights offer is definitely better as there are no property exclusions at all and the nights can be redeemed at any Hyatt property in the world. Category 6 and 7 hotels go for 25K – 30K a night, so you are clearly coming out ahead. However, if you stay at the lower tier properties (1-5), the future 40K offer is likely better. For me, I decided I wanted another 2 free nights at the Park Hyatt Maldives and applied for the card. Result: instant approval. Like the British Airways card, this card is not subject to Chase’s 5/24 rules. In the last three months, I’ve now successfully received the Chase Sapphire Reserve, Chase Ink Plus, British Airways Visa Signature, and The Hyatt Credit Card.  See – Negotiated Chase Ink Business Approval Despite 5/24 Rule…on top of Reserve! […]