Delta sees a new future for its Salt Lake City (SLC) hub. This future integrates with the airline’s aggressive plans to dominate in the Asia markets. Delta said it is contemplating nonstop airline service to several Asia destinations from the Salt Lake City Airport. This comes as the airport is currently under construction with a major overhaul. This modernization effort aims at making it one of the most updated in the United States.

Delta sees this hub improvement as a well-planned move in its mission to strengthen its stronghold on future international travel.

The costs of the new Salt Lake City airport have been steadily spiraling upward. Initially projected at a total of $1.8 billion, recent estimates have been closer to $3.6 billion. Besides SLC, Delta has made big investments in renovations at Seattle (SEA) and Los Angeles (LAX) airports, two of their west coast hubs.

The first phase of the airport’s project is expected to open in 2020. Delta will most likely take advantage of the international gates made available. Delta has been hinting that they will use those gates to focus their energies on expanding international travel. The airline plans to grow capacity by roughly 3% this year by putting more emphasis on international travel than in 2018, as outlined in a recent investor presentation. 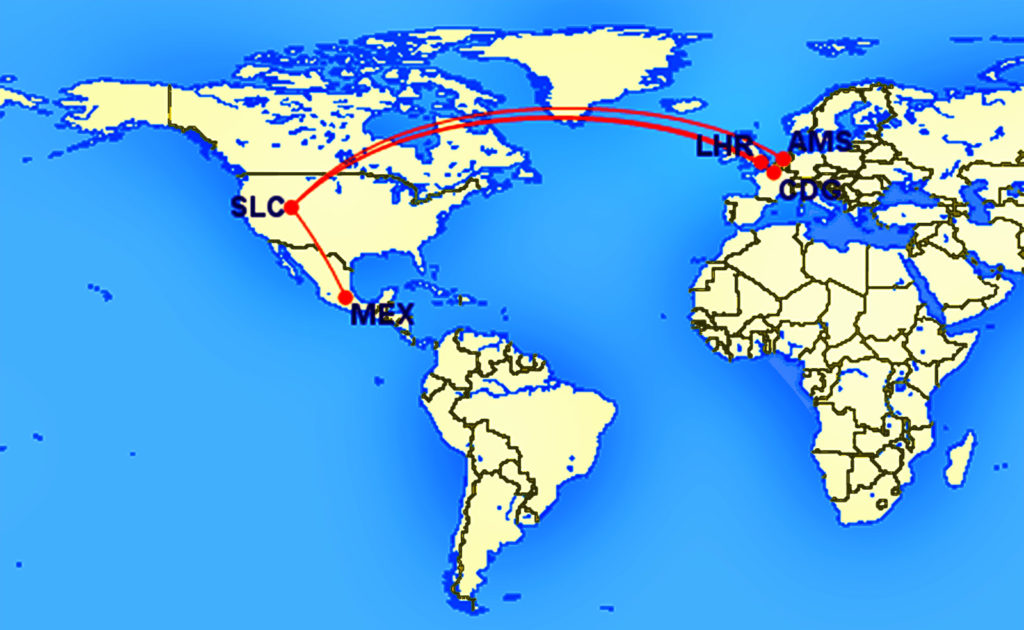 Looking towards the Asian markets, I see that there is great potential for Delta to feed their two major partners (China Eastern and Korean.)  Such potential nonstop destinations include Incheon (ICN) as well as both Shanghai (PVG) and Beijing (PEK.)

I would be tickled, as would many other Delta flyers, if Delta returned with a service to Hong Kong. Perhaps a SLC-HKG route could be a possibility?

Salt Lake City is geographically positioned so as to bring East Coast passengers to the hub for onward (nonstop?) flights to and from Asia.

As Delta opens up these new routes, we could see some new award travel opportunities. SkyMiles is an easy airline currency to book award travel. However, over time, Delta has hidden the award charts and devalued redemptions without notice. Nonetheless, I could foresee some great redemptions as new routes are introduced. One of the best ways to book award travel is to leave it to the professionals at Juicy Miles,  our affiliate partner. Their team of more than 40 travel experts can get you the best redemptions and take care of it every step of the way. The updated SLC airport should be completed in 2024, which is not too far off in the airport construction world. I think we will see also see a continued increase in the frequency of Airbus A220 flights to/from SLC in the future. You can read a review of this game-changing regional aircraft from PM editor Chris.

It’s no secret that Delta wants to dominate in the Asian markets with its recent joint venture and investment in Korean Air. They also hope to accomplish this by feeding more traffic to those markets with Delta’s own metal.

So it should not come as a huge surprise should Delta make nonstop flights to Asian destinations from Salt Lake City happen. We also expect a lot more exciting new route announcements after the new SLC airport is completed.

And personally, I really want Delta to serve Hong Kong again. What Delta international nonstop routes would you like to see from Salt Lake City in the future?

Ultimate Portugal Travel Guide: From ‘Up And Coming’ To A Thriving Destination

SLC is a complete NEW build, no pieces of the terminals/concourses/gates currently in use will remain.. Thus it is not an overhaul or a modernization but new construction. It’s going to be fantastic once it’s done

Robert-
Thanks for the clarification. I’m looking forward to the new airport as well! I’ve walked many a mile between gates over my years of travel through the SLC airport.