Did Southwest Cancel My International Flight Without Telling Me?

Southwest Airlines’ efforts to develop an international presence have not been without their challenges, some of which I discussed in a prior post which resulted in a cancelled itinerary during a ticket audit.  Despite these issues, I was able to use Southwest to take a recent trip to Mexico City, which was fabulous (documented in posts 1, 2, and 3).

I have an upcoming Southwest trip planned to take Annalisa to Aruba.  She loves the beach and you can’t go wrong in Aruba.  Personally, the dry, sunny weather and the blond beaches and gentle surf are not the big attractions for me.  I’m excited for the chance to see the divi divi trees sloping due to the constant trade winds in the area!  The divi divi trees act as Aruba’s natural compass, always pointing in a southwesterly direction due to the trade winds that blow across the island from the northeast. When Southwest released their Fall 2015 schedule earlier this year, I pounced on the opportunity to book flights for Annalisa and I.  A few clicks later we had confirmed tickets and Annalisa was thrilled! 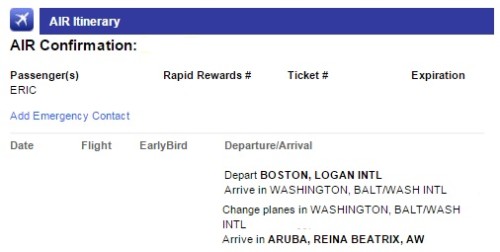 This past week, my brother, Matthew, let us know that he wanted to tag along.  So I went on Southwest’s website to see how much the fare was going to be.  Imagine my surprise when I saw that the flight didn’t seem to exist anymore!

Boston to Aruba Flight No Longer Exists on Southwest’s Website

Now I was concerned!  Were our vacation plans ruined?  I had booked a non-refundable hotel room rate!  The flight itinerary still shows in my Southwest account!?  I took a deep breath and went to see the Southwest Airlines schedule to see if the flight still appeared to in the schedule.  Yep, it was.

Flight Continues to Show Up in Southwest’s Schedule

Now I was confused!  I called Southwest’s 1-800-I-FLY-SWA customer support number hoping for a quick resolution and got just that.  It turns out that with Southwest’s international inventory, flights that are sold out ‘disappear’ from the website with the error shown above.  This is unlike domestic Southwest flights, which actually show up as “Sold Out” when you search for them.

Lesson learned: your international Southwest itinerary is not cancelled when it disappears from Southwest’s website.  It’s just sold out!  The Southwest employee was unable to let me know when they anticipate fixing this technical glitch.

The Best… Italian Restaurant Ever (and Rob Gronkowski!)