JetBlue is concerned that the DOT’s delay in granting final approval for Norwegian Air Shuttle to operate flights via its Irish subsidiary this April could hurt its chances to fly to Europe (Norwegian applied over 2 years ago). Here’s their letter to the DOT that was reviewed by Reuters:

“As an airline which may one day seek authorization from the aviation authorities of European Union member states for new transatlantic services, I am concerned that JetBlue might face similar treatment and delays in the future,” James Hnat, JetBlue’s general counsel, wrote.

JetBlue had their second quarter earnings call back in July and comments from both the CEO and EVP as well as a graphic shared on the airline’s twitter account seemed to indicate that Europe is definitely a future possibility.  JetBlue noted on the call that in 2019 they will have the option to covert A321neo orders into the long-range A321LR.

JetBlue’s CEO said that “this enhanced airplane type could well be a game changer for us and provide the ability for JetBlue flights Europe from other East Coast focused cities should we choose to do so”. Meanwhile, the executive vice president of planning said “…as Robin alluded, the 321LR could be the leap allowing us to leverage our relevance in the East Coast focused cities and accelerate launching service to Europe. We are not formally committing to this fleet type and we are not ready to announce anything today, but we are excited about the optionality and the potential opportunity.”

…and then there was the tweet below with the words “new possibilities” and an arrow pointed towards Europe. 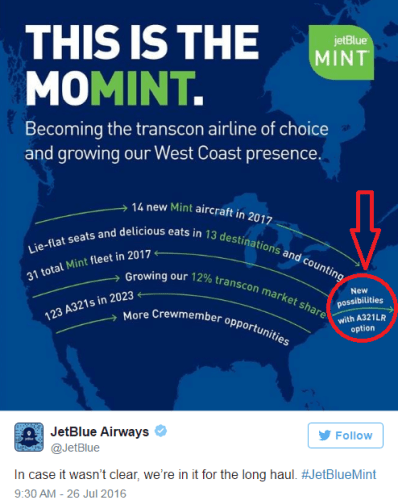 That’s the problem with protectionism- it works both ways and ends up damaging both parties and all consumers.